¡Presente! We must not overlook what made John Lewis the ‘Conscience of Congress’ 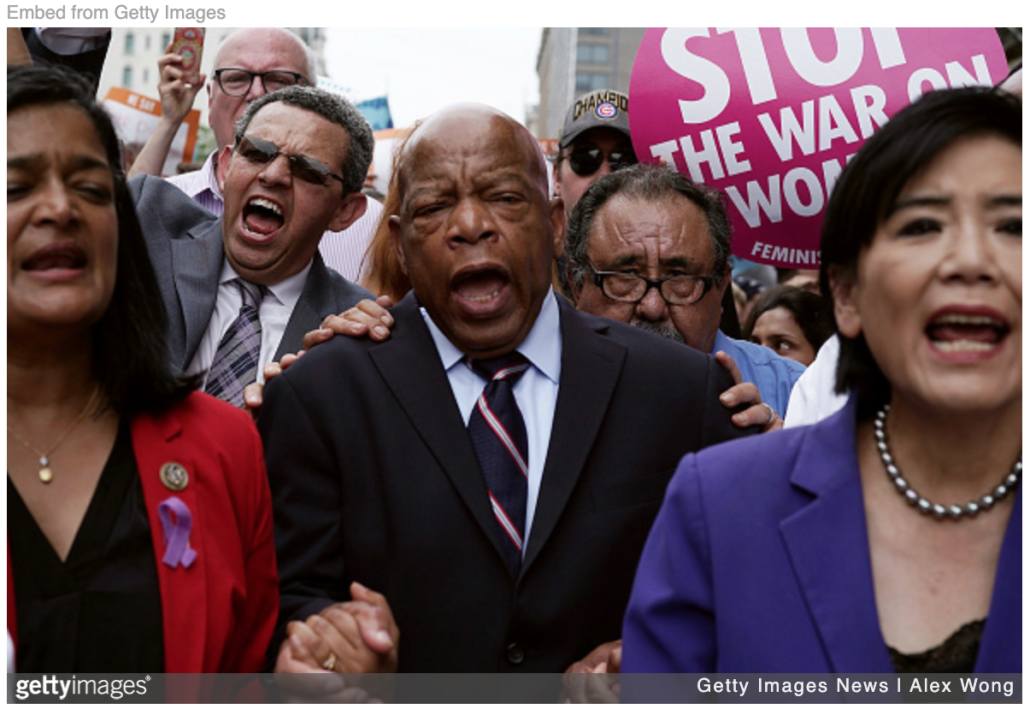 This reflection is part of FOR’s ¡Presente! series, honoring the lives of John Lewis, C.T. Vivian and other civil rights movement icons.

“You’re an embarrassment!” he shouted as he came across the street. “To your race” is the part of the phrase he implied but didn’t add.

My wife and I have been vigiling each afternoon on a busy street corner one-and-a-half blocks from our home in Winston-Salem, NC, for the past two months. It is our attempt to “get in the way” and to “find some good trouble,” in the words of the late John Lewis.

After the death of George Floyd, we attended two Black Lives Matter protests in our city, yet quickly realized that social distancing and protesting in large groups don’t work for those of us in the category of folks considered “at risk” during the COVID-19 epidemic.

I don’t know the name of the man who was so infuriated at me for holding a Black Lives Matter placard and my wife for bearing one which read “Dismantle Racism: Work for Justice & Peace, Respect the Dignity of Every Human Being.” He ranted at us as we tried to talk with him, but he kept shouting and was just returning to his car when another car — driven by a young African American man — pulled in between in an effort to protect us.

The situation could have escalated but we asked the young man not to get involved, so he just sat in his car, a visible barrier between the two philosophies. The upset white man drove away after a few more rants. Our daily vigils continue, and the support of our fellow Winston-Salemites is apparent in the large number of honks and the waves we receive each day. Not that all the fingers are a thumbs up, but the obscene gestures are few and far between.

Does it matter? Are we making any difference? We occasionally have white drivers shout at us “All lives matter!” We agree with them, by the way, as would Congressman Lewis. I have a bookmark inscribed with the words of Gene Testimony Hall: “Let’s be clear, we said ‘Black Lives Matter.’ We never said ‘Only Black Lives Matter.’ That was the media, not us. In truth, we know that all lives matter. We’ve supported your lives throughout history. Now we need your help with Black Lives Matter, for Black lives are in danger.”

I know the truth of that statement each day when I read our local paper. Last week two 14-year-olds died outside on a lawn, victims of a drive-by shooting. I have a litany I pray on the vigil line that goes “Say their names: Eric Garner, Michael Brown, Breonna Taylor…”

The news is replete with tributes to Rep. Lewis these days, as well it should be. But I have found many of the stories missing a vital component: His forthrightness in addressing the connections between racism, excessive materialism, and militarism in American society. Lewis believed heart and soul in nonviolence to confront these “triple evils” named by Dr. King. He believed that love was the answer. In the words from my wife’s protest sign and the Baptismal Covenant of the Episcopal liturgy: Will you strive for justice and peace among all people, and respect the dignity of every human being? John Lewis certainly replied: I will, with God’s help.

I can’t but think of the interconnectedness of events of late. Is it coincidence that the Federal Building around which protests in Portland, Oregon, are taking place each evening is named in honor of the late Sen. Mark Hatfield, and that he and Congressman Lewis were the sponsors in their respective chambers of the Religious Freedom Peace Tax Fund Act? That is how I met John Lewis. I was the director and federal lobbyist of the National Campaign for a Peace Tax Fund, and John Lewis, representative of the Fifth Congressional District of Georgia, was the congressional sponsor of our bill. Each session of Congress he would re-introduce the Peace Tax Fund Act.

Ironically, this bill, first introduced on “Tax Day,” April 15, 1972, is as old as my 1972 marriage to Christine, my vigil partner, which took place at the headquarters of the Fellowship of Reconciliation, or FOR, an organization of religious pacifists. This legislation was originally sponsored by Rep. Ron Dellums, a Democrat, who held office in California from 1971-1998. He worked with FOR on legislation opposing the war in Vietnam. This bill would establish a Peace Tax Fund into which those of us who are conscientiously opposed to war and the militarism of our society would pay our taxes each year. The money in the fund could not be allocated for military purposes. Thus, the Peace Tax Fund could not be used to pay for nuclear weapons, wars in other nations, the militarization of our police forces, the military recruiting of our youth, etc. American taxpayers who oppose war as foreign policy could legally redirect our tax dollars to education, health care, social needs, infrastructure projects, etc. Christine and I have also, since 1972, resisted through protest, tax resistance, and the courts, the right of our government to use our tax dollars as weapons of war.I can’t but think of the interconnectedness of events of late. Is it coincidence that the Federal Building around which protests in Portland, Oregon, are taking place each evening is named in honor of the late Sen. Mark Hatfield, and that he and Congressman Lewis were the sponsors in their respective chambers of the Religious Freedom Peace Tax Fund Act? That is how I met John Lewis. I was the director and federal lobbyist of the National Campaign for a Peace Tax Fund, and John Lewis, representative of the Fifth Congressional District of Georgia, was the congressional sponsor of our bill. Each session of Congress he would re-introduce the Peace Tax Fund Act.

At times the Peace Tax Fund bill has had upwards of 50 representatives and senators as co-sponsors. But for the last decade Rep. Lewis was the sole sponsor. Just this year Rep. James P. McGovern, a Democrat from Massachusetts, joined Congressman Lewis and became a co-sponsor of H.R. 4169. There hasn’t been a Senate sponsor since Mark Hatfield retired in 1997.

Due to funding issues and compassion fatigue there came a time, a few years back, when the National Campaign’s board of directors was considering dissolution of the organization. They were tired after decades of lobbying and discouraged by decreasing sponsorship of the bill. It was John Lewis who convinced the directors that this bill was such a significant piece of legislation that the National Campaign for a Peace Tax Fund needed to be revitalized, especially during an era when few Americans considered the right of conscientious objection to war. The congressman’s website had a banner headline that emphasized our bill and spoke of the right of conscientious objection to war.

Lewis was known as the “Conscience of the Congress” because he spoke out, sat-in, and stood up for the rights of all — regardless of race, gender or philosophy. His office door was open to all, and Georgia peanuts and ice-cold water were there for the taking.

Like John Lewis I believe in nonviolent direct action as a way of speaking truth to power. My arrests number in the double digits, yet that still represents less than half of the 40 times Rep. Lewis was handcuffed and carted off to jail. I have never suffered the beatings he underwent during the civil rights era. Lewis called on us, if we really wanted to change society, to adopt love as a way of life. “This sense of love, this sense of peace, the capacity for compassion, is something you carry inside yourself every waking minute of the day. It shapes your response to a curt cashier or a driver cutting you off in traffic.” Of his beatings he wrote: “It can be nothing more than a sad and sorry thing without the presence on the part of the sufferer of a graceful heart, a heart that holds no malice toward the inflictors of his or her suffering.”

One of his last acts of civil disobedience was a 2016 sit-in on the floor of Congress seeking the right to vote on gun control legislation. We know of him largely because of his civil rights activism, but his commitment to liberation and social justice was broad and intersectional; he demonstrated against the Iraq War, was arrested with the Dreamers in 2013, and demonstrated at the Sudanese Embassy leading to two arrests for speaking against the genocide in Darfur. He stood in solidarity with the tired, the poor, the immigrant, those yearning to be free. On his last day in Washington, D.C., before being hospitalized, he went to Black Lives Matter Plaza and spoke with the demonstrators to let them know they did not walk alone, he was with them.

May we live like John Lewis advised in a tweet in 2018: “Do not get lost in a sea of despair. Be hopeful, be optimistic. Our struggle is not the struggle of a day, a week, a month, or a year, it is the struggle of a lifetime. Never, ever be afraid to make some noise and get in good trouble, necessary trouble.”

[author] [author_image timthumb=’on’][/author_image] [author_info]Jack Payden-Travers is a social activist who lives in Winston-Salem, NC where he helps raise three grandchildren. He retired in 2015 as the director of the National Campaign for a Peace Tax Fund. In what seems like a former life, he was a college professor, served on the staff of the Fellowship of Reconciliation and was the Public Education Associate of the Capital Punishment Project of the ACLU.[/author_info] [/author] 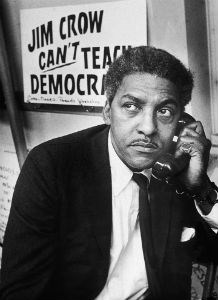