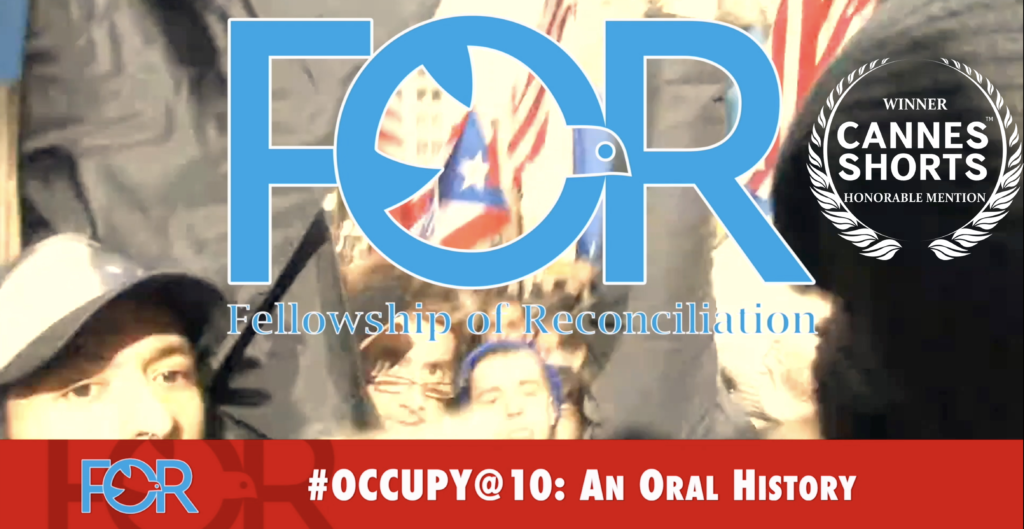 September 2021 marks the 10th anniversary of the Occupy Wall Street protest that took over Zuccotti Park in lower Manhattan for two tumultuous months in 2011. The action began with little fanfare on September 17, 2011, but soon captured worldwide attention. It ultimately inspired similar protests across the U.S. and in many international cities for its commentary on extreme income inequality and the gap between the wealthiest 1% and the rest of society.

#Occupy@10: An Oral History is a short documentary (30 minutes) produced by the Fellowship of Reconciliation (FOR-USA) that tells the story of Occupy through the eyes of seven interfaith leaders and activists who participated in Occupy Wall Street and Occupy Oakland. FOR-USA is interested in inviting organizations and communities to use the film as a tool for deeper conversation surrounding the themes discussed in the documentary, including economic and racial inequality, intersectionality, faith-based activism etc. In addition, FOR-USA is seeking partners interested in setting up screening events in which the faith leaders featured in #Occupy@10 would participate.

About #Occupy@10: An Oral History
In Fall 2011, NYC ministers the Rev. Michael Ellick, from Judson Memorial Church, and the Rev. Rosemary Bray McNatt, from the Fourth Universalist Society, as well as Union Theological Seminary students Carolyn Klaasen and Matthew Arlyck and journalist Nathan Schneider devoted countless hours to organizing and participating in actions around Zuccotti Park and the Occupy encampment. Approximately 3,000 miles away, Rev. Sandhya Rani Jha and Rev. Nichola Torbett were having a very similar experience at Occupy Oakland.

In #Occupy@10: An Oral History, these interfaith leaders reflect on the enormous energy and excitement that characterized the idealistic beginnings of Occupy, a “leaderless” movement in which no money was needed, and people lived and made decisions in common. Those heady days soon gave way to a sobering realization that lurking just beneath the class analysis that dominated the mostly young and white Occupy movement there was a broad-based lack of a racial or decolonial analysis.

#Occupy@10 recounts how these failings contributed to the ultimate fragmentation of the movement. In spite of these critiques, however, the interfaith activists in the film reflect positively on Occupy’s immense legacy and impact and suggest that the movement’s DNA is evident in numerous front-line social movements and policy battles that have occurred in the decade since.

A two-page study guide resource for facilitators is available with suggested questions for discussion and reflection. (PDF download here)

Contact
For more information on how you or your organization can set up a screening or use #Occupy@10 in your classroom, place of worship etc. please contact the film’s director, Bill McGarvey 201-725-4202, bill@mcg-media.com Ethan Vesely-Flad at FOR-USA (organizing@forusa.org).

The Fellowship of Reconciliation (FOR-USA) is an interfaith movement working nationally and globally on today’s most pressing human and civil rights issues through advocacy, activism, and educational programs. Founded in 1915, FOR-USA is the oldest interfaith peace & justice organization in North America, promoting active nonviolence and progressive social change through a diverse membership of people of conscience spanning many religious, spiritual, and cultural traditions.