The Freedom Rides: From Project to Mass Movement 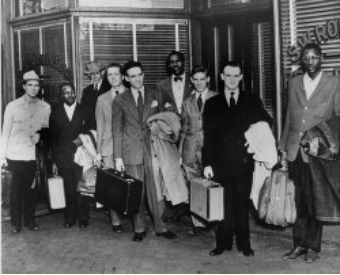 A few days ago, I returned from a Chicago trip as a participant on the Oprah Winfrey show, along with some 180 Freedom Riders. It was the 50th anniversary of the well-publicized 1961 Freedom Ride. It was a fascinating occasion, not only to see how Oprah’s show was put together, but also it provided a way for the Freedom Riders to reunite in a three-day conference, following the show, and through panel discussions, and personal conversations, to relive the days that bonded the group together by a memorable experience that helped to change history.

I was included although I was not on the 1961 Ride. I am the only survivor of the first Freedom Ride in 1947, which we called the Journey of Reconciliation. This 1947 Journey was a project of the Congress of Racial Equality (CORE) and the Fellowship of Reconciliation (FOR). At the time I was co-secretary, along with Bayard Rustin, of the Racial-Industrial Department of FOR and executive secretary of CORE.

Here is how the 1947 project developed, and the idea of the freedom ride was conceived. Irene Morgan, an African-American woman, boarded a Greyhound bus in Virginia in July 1944. Unlike Rosa Parks in Montgomery, Alabama, 11 years later, this was an entirely spontaneous and unplanned action. She did not sit in the very back of the bus, the Jim Crow section. There were no seats there. A white man soon got on the bus, and the driver, following the racial segregation tradition and the state Jim Crow law, told Irene to stand and give her seat to the white man. She refused. The police were called and Irene was arrested. To summarize, the NAACP, through its legal counsel, Thurgood Marshall, took the case all the way to the Supreme Court, and on June 3, 1946, the decision of the Court set a precedent. It declared that segregation in interstate travel was unconstitutional as an “undue burden on interstate commerce.”

In an executive committee meeting in Cleveland in September 1946, CORE decided to test the Supreme Court decision to see if it was being obeyed in states in the South with Jim Crow laws. Bayard Rustin and I were given the responsibility of organizing the project – raising funds, recruiting volunteers for the mission, planning legal defense in case of arrests, and organizing meetings in each place we stopped along the way. Our Journey of Reconciliation was limited to the upper South (Virginia, North Carolina, Tennessee, and Kentucky) on the advice of our southern advisors. “Make this a test case,” they said. The original plan was Washington, D.C., to New Orleans.

For two weeks, 16 of us – eight white and eight black – challenged Jim Crow seating. There were 26 tests of bus and train policy, with 12 arrests. There was only one case of violence: in Chapel Hill, North Carolina, where taxi drivers attacked [us]. Three of our group later served 21 days on the road gang in North Carolina for violating Jim Crow laws – Bayard Rustin, Joe Felmet, and Igal Roodenko. The story of the 1947 Journey is told in the PBS documentary You Don’t Have To Ride Jim Crow, which was aired in 1995 over some 90 stations around the country. [Ed. Note: The film was directed and produced by Robin Washington, past FOR staffer and editor of its national magazine, Fellowship.]

This first Freedom Ride was the pattern for the 1961 Ride, which again began as a project of CORE – under the leadership of Jim Farmer, with whom I had worked in Chicago in organizing CORE in 1942. The story is vividly told in Ray Arsenault’s book, The Freedom Riders (Oxford University Press, 2006). On May 4, 1961, thirteen Riders left Washington for Richmond, Virginia, the final destination being New Orleans two weeks away, they thought. Following the pattern of 1947, Jim Crow state laws were challenged with designated whites sitting in back and blacks in front. No unusual issues arose until the Greyhound bus carrying the Riders crossed into Alabama, where in Anniston, a large mob attacked the bus, burning it and viciously injuring Freedom Riders. This became front-page news around the country and abroad. Jim Peck, the only freedom rider on both our 1947 Journey and the ‘61 Ride, was seriously injured. This incident is shown dramatically both on the Oprah Winfrey show and the PBS American Experience documentary, which aired nationally last week on May 16th.

This incident and the violence in Birmingham brought the CORE project of ’61 to a halt with the intervention of the U.S. Department of Justice, through Robert Kennedy, the attorney general in the new Kennedy administration in Washington. The CORE phase of the Freedom Ride ended in Birmingham, Alabama, with mob action and with most of the Riders injured. But the Freedom Ride had attracted the attention of the American people.

The third phase of the Freedom Ride began in Birmingham as a group of students in Nashville, Tennessee – many connected with the Student Nonviolent Coordinating Committee (SNCC) – decided courageously to continue the ride to New Orleans, knowing their lives would be on the line. They had been well-trained in nonviolence by Jim Lawson and led by Diane Nash. They had practical training in restaurants sit-ins in Nashville. Their experiences are well documented both in Ray Arsenault’s book and the American Experience documentary. What began as a project of CORE was transformed into a mass movement, as hundreds of volunteers from all parts of the country descended on Alabama – and on Mississippi, where many spent weeks in Parchman penitentiary. This era came to a conclusion with the action of the Interstate Commerce Commission in September 1961 demanding that all signs designating segregation areas on buses or in bus or train station facilities (drinking fountains, restaurants, or restrooms) must be eliminated.

The recent gathering in Chicago was inspirational to me and to others. Now 50 years older than in 1961, many of those who had suffered grievously a half-century earlier, spent a few days together. Congressman John Lewis, Jim Lawson, Diane Nash, Jim Zwerg (badly beaten in Birmingham), Rev. C.T. Vivien, Gordon Carey of CORE who promoted the idea of the new Freedom Ride to Jim Farmer in early ’61, were among those there. Mary Jorgensen, then of Sonoma County, California, who, along with her late husband, Russ, had been jailed in Mississippi, was there. Aleah Bacquie Vaughn, granddaughter of Irene Morgan, was on hand; as was Ray Arsenault; and Derek Catsam, with a new book coming out on the Rides (Freedom’s Main Line: The Journey of Reconciliation and the Freedom Rides, June 2011, The University Press of Kentucky); Hank Thomas who narrowly escaped suffocating on the burning bus at Anniston; Bernard Lafayette; John Seigenthaler, assigned by Robert Kennedy to try to stop the third wave of Freedom Riders from Nashville; and so many others. And many have died, like Jim Peck and Jim Farmer, in the years since ’61.

The Freedom Ride, which began as a project, developed into a mass movement. It was part of the steppingstone that led to the March on Washington in 1963, the passage of the Voters Registration and the Civil Rights Acts of 1964-65, and to the end of Jim Crow laws in the South.

What an experience it was to be a part of this in Chicago in 2011!