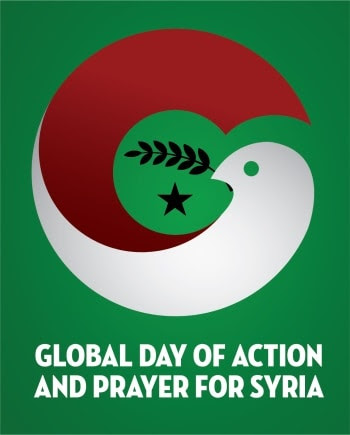 The Global Day of Action and Prayer for Syria was held on September 21. In preparation we asked guest experts to contribute essays that help our understanding of “the things that make for peace.” We hope these will help in our understanding of an alternative vision of peace with justice and practical peace-making strategies that can stand as alternatives to the war and violence that is being perpetuated in Syria. This is the fourth in this series of background essays.

By Susan Smith, Community Liaison for the Muslim Peace Fellowship and Community of Living Traditions

The Syrian refugee crisis, along with the global refugee crisis, has reached epic proportions since the start of the Syrian civil war in March 2011. The United Nations High Commissioner for Refugees (UNHCR) estimates there are 65 million forcibly displaced people in the world, 21 million of whom are refugees. Of these, 4.8 million are Syrian and another 8.7 million are internally displaced persons (IDPs) within Syria.

According to Dr. Ani Kalayjian of the Association of Trauma Outreach and Prevention (ATOP) Meaningfulworld, all Syrians are suffering from acute trauma as a result of the ongoing war. However, many are also suffering from intergenerational trauma. These include the children, grandchildren and great grandchildren of Armenians who fled Ottoman Turkish Genocide in 1915; and Palestinian refugees who fled Israeli occupation in 1948 and 1967, as well as fled civil wars in Jordan, Lebanon and Iraq. It also includes Syrians displaced by the Israeli occupation of the Golan in 1967, and its eventual annexation in 1981.

Without reconciliation of past atrocities and proper healing, Kalayjian says that trauma is often transmitted seven generations and can manifest in the victims as fear, hate and perpetuation of violence.

Some of the most devastating images of acute and intergenerational trauma depict Yarmouk Refugee Camp, once a population of 180,000 Palestinian refugees now reduced to 8,000 living among the rubble. Just outside of Damascus, Yarmouk became the scene of intense fighting in 2012 between the Free Syrian Army and the Popular Front for the Liberation of Palestine supported by Syrian Army government forces. The camp was besieged by various factions and deprived of supplies, resulting in starvation, disease and untreated medical conditions. Blanketed by barrel bombs by the Syrian Air Force, it was then over- run by the so-called Islamic State, or Daesh, in 2015, effectively placing the refugee settlement in a stranglehold. Male residents who did not manage to flee or pledge their oath of allegiance to Daesh were executed. In one of the most horrendous examples of acute trauma, those who joined were forced to torture and murder others to prove their fealty. At the same time, in macabre irony and demonstration of intergenerational trauma and violence, Daesh militants reminded their captives and recruits that Israel and the United States in particular were responsible for their miserable plight as refugees.

As of August 2016, the Syrian Observatory for Human Rights puts the Syrian death toll at 470,000, with no end in sight, as foreign powers including the United States, Russia, Saudi Arabia, Turkey, Iran, Lebanon and Qatar protract and fuel a war that should have ended long ago. As the death toll, devastation and destruction continue to mount and grow, humanity looks on with a responsibility to end this horrific war.

One area in which trauma healing is addressed is through education. Jesuit Refugee Service emphasizes that education is a life-saving intervention for children and adolescents who are forcibly displaced from their homes. In crises like Syria where many agencies provide basic humanitarian assistance, JRS is on the ground organizing educational and recreational activities to heal trauma, promote human dignity, and build skills. “JRS education programs help ensure that the most vulnerable and disenfranchised — with a special focus on women and girls — have access to an education,” said Armando Borja, Regional Director of Jesuit Refugee Service North America.1

While the brutal living conditions of displacement severely affect all Syrians, children bear the most trauma of war: lost homes, lost security, lost communities, lost educations. These factors threaten to culminate in lost futures of an entire generation. The Karam Foundation has a Creative Therapy program for displaced Syrian children, which counters these traumatic factors by rebuilding bonds between mentor and child, rekindling inspiration and creativity, restoring confidence, and reclaiming the innocence of childhood.2

Mennonite Central Committee provides essential trauma healing to help defuse violent responses to conflict. MCC’s partners, like the Popular Aid for Relief and Development (PARD) in Lebanon, offer trauma care that helps children and their parents build their resiliency and think through decisions in this stressful situation. Naomi Enns, an MCC representative for Lebanon and Syria, describes the work PARD is doing as “holding very, very fragile communities in the south together in ‘peace’ful cohabitation.”3

Ways You Can Help

Consider funding some of these organizations: