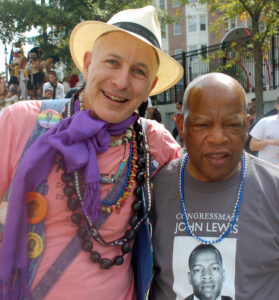 GUS KAUFMAN:
I’d always heard of John Lewis growing up in Macon, Georgia. My family was Jewish and my father was a businessman and an activist involved with civil rights really from the 1940s. We had a family friend whose daughter was one of the Freedom Riders as a teenager. My father was even called before a grand jury for being part of interracial meetings. It was illegal to have an interracial meeting when I was a boy.

So I grew up with all these stories. Right after college in 1969 or 1970, I was looking for work and I came to Atlanta, and Congressman Lewis had just started as the head of the Voter Education Project, which worked to get people registered to vote. They advertised that they were hiring an administrative assistant for him and I knew I was not qualified in any way but I just wanted to meet the man. So I applied and he interviewed me and I was thinking ‘wow, I can’t believe I got to meet him.’ Of course I didn’t get the job, so my first encounter with John Lewis was being turned down for a job by him and it was an honor.

Later on, after I’d started my work as a psychotherapist here in Atlanta I cofounded an anti-domestic violence organization called Men Stopping Violence. John was then a city councilman in Atlanta and we asked him to be our first chairman of the board. He agreed to do it immediately because he believed in the issue. The entire board arrived for our first meeting at his city council chambers and waited and waited for him to arrive. Some of the board members were about to leave as it had gotten late. Just as that was happening in rushes John saying “I’m so sorry. I’m so sorry. But I was out doing the people’s business.” That’s my feeling about John. He was always out doing the people’s business, as a congressman, as a city council person, wherever he was.

He was revered because he always stood up. John just kept being important in all kinds of ways you wouldn’t expect right up until the last week of his life. Whether it was for racial justice or LGBTQ rights which he was way out in front on in the 1980s.

I’ve lived in his congressional district for years and I would run into him at the grocery store or dropping off his clothes at the dry cleaners. Personally, he was quiet and very humble. When he would go to the grocery store, it would take him two hours to shop because everybody wanted to stop and talk to him and get a picture and he would oblige.

One vivid memory that stays with me happened eight years ago. Henry Louis Gates did the second episode of his show, “Finding your Roots” with John Lewis. They were having a showing of it at a small tavern in our district here before it aired. It was just John and about 25 supporters and friends. It turned out that the researchers found out that John’s grandfather had actually voted in Alabama, in 1867 during Reconstruction, before white southerners succeeded in shutting down black voting. When John saw that during the showing with us, he started crying. It was such a privilege to get to see that with him. For him the vote was almost sacred.[author] [author_image timthumb=’on’]https://forusa.org/wp-content/uploads/2020/07/Gus.Bio_.jpg[/author_image] [author_info]Gus B. Kaufman, Jr., Ph.D., is a clinical psychologist. In addition to lecturing and teaching around the U.S., Europe and Asia, Gus has co-founded five non-profit organizations and published many chapters and articles. He is a former vice chair of the Fellowship of Reconciliation’s national council and a past Atlanta FOR convener.[/author_info] [/author]