Following the Methodist Decision: Breathe in Suffering, Breathe out Peace 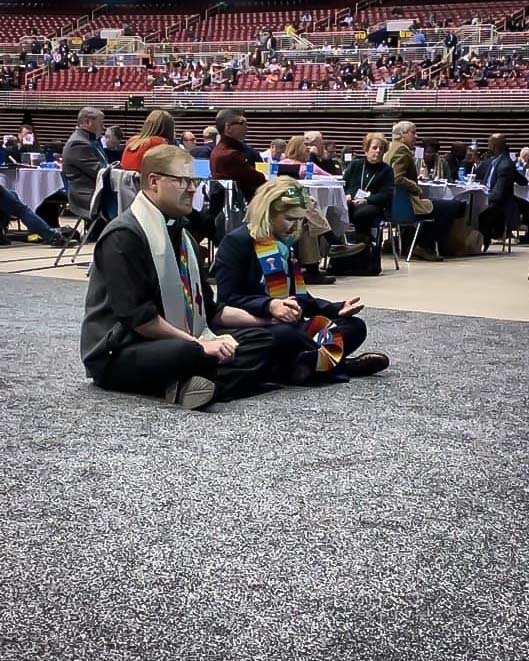 The United Methodist general conference is over and a new day has begun. People are still suffering, struggling with addiction of all sort, striving to stay in recovery, and being stopped, vilified and incarcerated at our borders. Queer folks, people of color, women all are still facing violence just for existing. But one of the vehicles on earth meant to address this brokenness is itself deeply broken.

Some have asked me about this picture of Brian Adkins and me praying on the floor of the general conference. It was not a planned action. After the vote to purge LGBTQ persons and our allies from the United Methodist Church, many began singing in anger, sadness, mourning, and protest. It was a powerful moment of expression after having experienced spiritual violence.

But then those who had prevailed in the vote began signing the songs of the church, too. For a moment, like two opposing pep bands at a college basketball game, the voices tried to drown each other out. It was an image of a deeply broken body.

I left and ran into Brian who said, “We are going to the floor.” We are not delegates and the floor was closely guarded. We walked to the other side of the stadium behind the stage and entered the floor from the left. We kneeled, then sat down in front of the cross to pray.

For me, this was the only thing with integrity that I could do in this moment. When leading the Multifaith Living Community in Davis, California, I learned a practice from studying Thich Nhat Hanh of breathing in suffering, attempting to transform it in your body, and breathing out peace. This felt like all I could offer. Breathe in brokenness, breathe out compassion. Breathe in suffering, breathe out peace.

Did it do any good? I don’t know. But I do know it kept me from doing harm out of my own sadness and anger. Hurt people hurt people. But hurt people, out of true empathy, can also be our most powerful agents for creating more loving, just, and peaceful places. I know this because I follow one who showed that the only way out of deep pain and betrayal is through it, and on the other side there is life. May new life come.

And please do take time rest, mourn, heal. Be peace and be at peace.