Karbala, Iraq–It is Christmas day, and I am in Karbala with dear friends. We awoke to a second day of rain, and pictures of flooding, especially in Baghdad, are being shown on TV. Yesterday, on Christmas-eve, several tents caught fire in a camp for the internally displaced near Mosel. As I write you, I am looking at the charred remains of one of the tents on TV. Angry people are describing what happened, lifting high the kerosene heaters for all to see. And, of course, the conflict in Mosel is foremost in the news. I am missing a translator this morning as my host is at work. But I would like to relate something from last week’s events.

Over the years, we have made many contacts in Najaf through our generous host there, Sami. These include doctors, dentists, hospital personnel and University deans. On one particular morning last week two presentations for me had been arranged, one at a Medical college, another at a college of Dentistry. As Voices for Creative Nonviolence we are eager to hear from young people, and rather than giving a presentation, I welcomed the opportunity for an open exchange.

One of the questions that repeatedly arose was “What will happen under Trump to all Muslims in America?”

“We want the U.S. to understand one thing” said a student. “Islam doesn’t mean terrorism.”

When asked if there was any interest in the US elections, a female student spoke up. “The elections were not important for us, but somehow the U.S. rules the world and I think the elections for the U.S. president should be worldwide. I was really disappointed in Trump.” Another student felt that it didn’t matter who was elected, the U.S. policy would remain the same.

Both Najaf and Karbala house holy Shia shrines and thousands of pilgrims visit both cities annually. They are two areas which, thank God, have remained for the most part safe and stable. It is one of the reasons we can travel here.

One of the first students to speak in the lecture hall of about 150 students said “On face book I get the impression people think we are dodging bullets and bombs every day.  We live a normal life.” Someone retorted, but not harshly, “And in Mosel or in other parts of Iraq?” And there was a feeling of agreement in the room that Najaf has been spared the violence, destruction and death that beset most other parts of the country.

“We have to start by changing the corrupt government,” said one, “a government the U.S. put in. But I don’t know how to bring about that change.”

On another day, we visited the Middle Euphrates Cancer Center which opened in 2014 and provides radiation and chemotherapy. Fifty percent of their patients come from the middle Euphrates area and they receive patients from the internally displaced population as well.

They have entered a critical period in terms of budget cutbacks. As the incidence of cancer increases throughout the country, the Ministry of Health (which provides 90-95% of their services) is cutting their budget by 50% in 2017. In 2013 the budget was 3.7 billion dollars. In 2016 the budget was $1.2 billion dollars. The salaries are fixed, but the cuts will affect drugs, equipment and specifically cancer care. Last week 85 items in their drug stock were depleted; 50% of their overall stock is depleted. The Minister of Health can only provide 6% of their needs. This is indeed distressing news.

Just prior we visited El Sadder hospital. Walking through the halls, clean but in a state of disrepair, I was reminded of the time of economic sanctions. In one of the sitting rooms, a doctor sat down next to me and immediately began to tell me of two great needs: 1. deficiency in orthopedic supplies and 2. the need for training for their technicians. Could they come to the U.S. for a month or more of training? I asked to see the prosthetic unit and was taken there immediately. 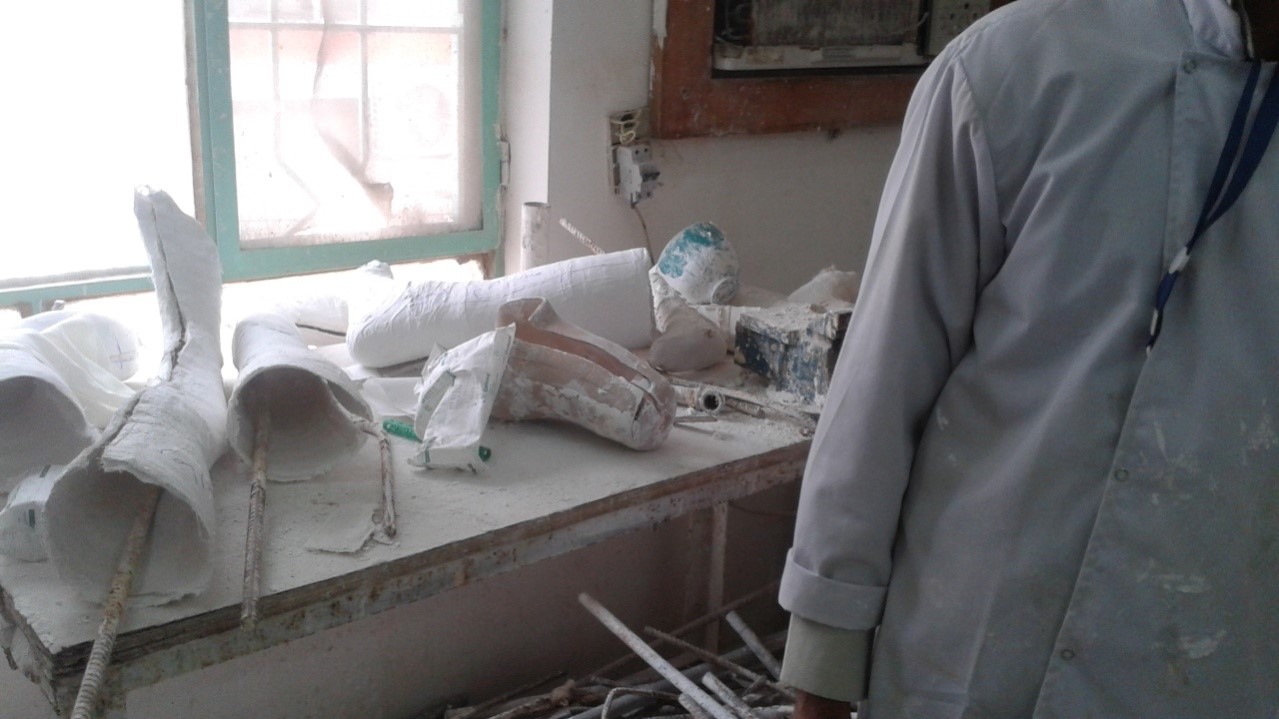 A personable young man named Hussein, 21 years of age, who had lost an arm (and had extensive scarring on his face) at 10 years of age due to an explosion approached me. He had spent time in Arizona receiving treatment, and his English was excellent. Hussein has many contacts with Shriner’s Hospital in NY city. I was given an itemized list of items they need. It would be a wonderful thing if Shriners could contact this hospital for some type of interchange and/or assistance.

I struggled with mixed emotions during the visit, feeling like a visiting “dignitary of importance” being escorted through the halls and units. I remembered back to my first meeting with a young 12-year-old quadruple amputee, Mohammed. Four or five years ago, his father and prosthetic technicians brought him to the house where I was staying in Najaf. Could I help him get a prosthetic arm?  For months on end I showed his picture and told his story in the United States and in Jordan as well, trying to find some organization that could help. Coming home from school at six years of age, Mohammed had stepped on an electrical wire from a pole downed by a U.S. bomb. All of my/our attempts proved futile. I still find it painful to remember this boy, who had not been able to feed himself, itch his nose or embrace a fellow human being since he was six years of age. This experience has made me very hesitant to receive similar requests.

Last night my host read to me from the Koran the account of Jesus’ birth. It was a special way to spend Christmas eve, assuring, that our faith traditions share much in common. Together we celebrated the love of God among us.