Since Pope Paul VI proclaimed January 1 a “World Day of Peace” in 1967, popes have issued statements for peace for that day. On December 8, in this most perilous of times, Pope Francis published the fiftieth World Day of Peace declaration for 2017, catching the church and the world by surprise with its call for nonviolence, never before so forcefully stated as an imperative rather than a personal option for some. 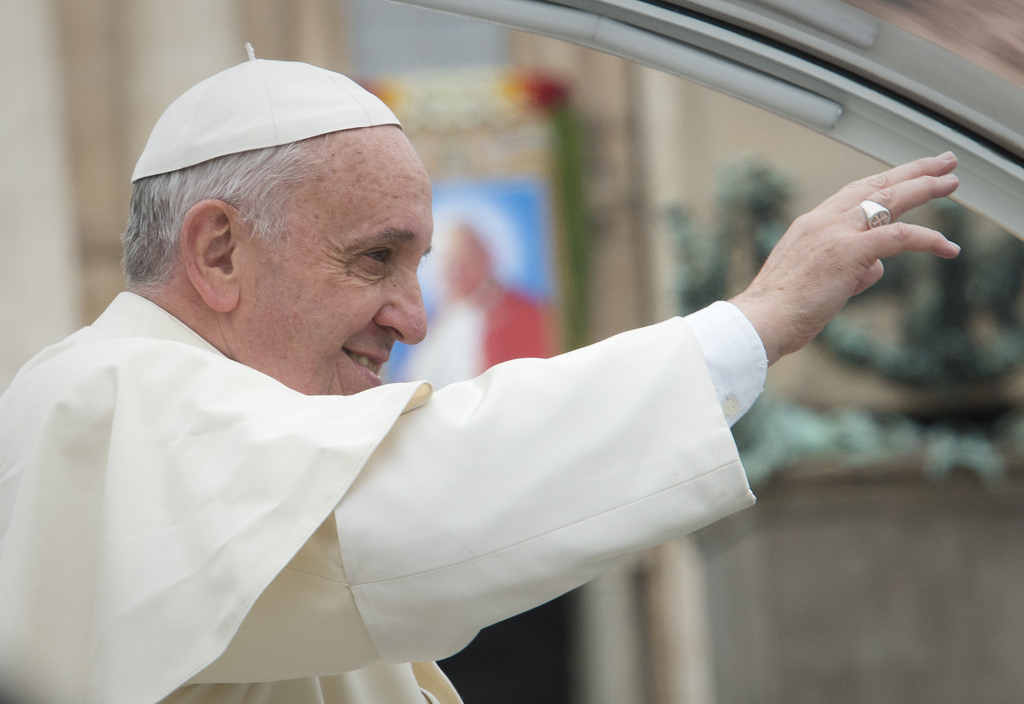 The title of the pope’s message, “Nonviolence: A Style of Politics for Peace,” presents nonviolence as a practical political program, not only for spiritual growth and personal relationships but also as the way that nations need to govern themselves and as the basis for international relations: “we know that this ‘piecemeal’ violence, of different kinds and levels, causes great suffering: wars in different countries and continents; terrorism, organized crime and unforeseen acts of violence; the abuses suffered by migrants and victims of human trafficking; and the devastation of the environment.  Where does this lead?  Can violence achieve any goal of lasting value?  Or does it merely lead to retaliation and a cycle of deadly conflicts that benefit only a few ‘warlords’?”

Ron Rolheiser, a Catholic priest and theologian who writes a popular column on spirituality and ethics, addressed the question, “So how realistic is it to refuse to arm ourselves? How realistic is it to pray to be disarmed?” in a column last June 20, “Of Guns and Pacifism.” While he had high praise for those “from Dorothy Day to Martin Luther King, from Mother Teresa to Christian de Cherge, from Daniel Berrigan to Larry Rosebaugh, we have been gifted by the witness of Gospel-inspired persons who, in the face of physical threat and violence, chose to risk their lives rather than pick up a gun,” Rolheiser’s answer, in contrast to Pope Francis’, is that it is not realistic at all, nor can it ever be. “Indeed, it might be said that those who argue for radical pacifism can do so only because they are already protected by police and soldiers with guns. It’s not too much of a stretch to say that, except for the guns and weapons that protect us, we all stand helpless before the criminals and psychopaths of this world.”

Even so, “there’s still a powerful case to be made for remaining personally disarmed” Rolheiser admits. “The late Cardinal of Chicago, Francis George, argued it this way: We need pacifists in the same way as we need vowed religious celibates, that is, we need gospel-inspired persons to give a particular, sometimes-singular, witness to what the Gospels ultimately point to, namely, to a place beyond our present imagination, a heaven within which we will relate to each other in an intimacy which we cannot yet imagine and where there will be no arms or weapons. In heaven, we will be utterly defenseless before each other. There will be no guns in heaven.” In other words, to illustrate the fact that there will be no guns as there will be no sex in heaven, we need pacifists the same way we need celibates, but neither can ever be the norm or it will be the end of the human race, one way or the other.

On this World day of Peace, Pope Francis differs from Father Rolheiser and Cardinal George. “Nonviolence is sometimes taken to mean surrender, lack of involvement and passivity, but this is not the case.” The modern pacifists that Rolheiser lists would not agree with him either, that their commitments to nonviolence signified a witness to “a place beyond our present imagination” but were of no practical earthly good for the present.

During the Spanish Civil War, Dorothy Day wrote “the Catholic Church cannot be destroyed in Spain or in Mexico. But we do not believe that force of arms can save it. We believe that if Our Lord were alive today He would say as He said to St. Peter, ‘Put up thy sword.’” Martin Luther King recognized that “the choice is not between violence and nonviolence but between nonviolence and nonexistence.” The pope’s message quotes Mother Teresa, “We in our family don’t need bombs and guns, to destroy to bring peace – just get together, love one another…  And we will be able to overcome all the evil that is in the world… While weapons traffickers do their work, there are poor peacemakers who give their lives to help one person, then another and another and another.” From Daniel Berrigan, “the only message I have to the world is: We are not allowed to kill innocent people. We are not allowed to be complicit in murder. We are not allowed to be silent while preparations for mass murder proceed in our name, with our money, secretly…It’s terrible for me to live in a time where I have nothing to say to human beings except, ‘Stop killing.’” Larry Rosebaugh was a deeply spiritual man and he lived a life of active resistance to war and imperialism, committed not just to the salvation of souls but the liberation of the oppressed. It does him little honor to present his life and death as a foretaste of “pie in the sky.”

Rolheiser needs to spin the story of Christian de Cherge to support his theory of nonviolence as well. De Cherge was superior of a community French Trappist monks in Algeria whom, Rolheiser claims, were martyred by terrorists. The monks had been threatened but refused to take the protection offered by the Algerian Army, choosing instead to pray for their own disarmament. In March 27, 1996, about twenty armed members of the Armed Islamic Group (GIA) arrived at the monastery and kidnapped seven monks whose dead bodies were found two months later. The fate of these monks is not as certain as Rolheiser tells it. The only claim of responsibility by the GIA came from a militant who was in prison when the monks were killed. Thirteen years after their deaths, a retired French general, who was military attaché in Algeria at the time, testified to a judge that the monks had been accidentally killed by a helicopter from the Algerian military during a botched rescue, then beheaded to make it appear as though the GIA had killed them. The witness of these monks to the efficacy of nonviolence is none the less depending on which armed gang murdered them, the Armed Islamic Group or the ones in uniform that Rolheiser thinks could have protected them. Either way, he misses sadly the point of their martyrdom.

I am writing this on Christmas Day and I note that Ron Rolheiser’s “On Guns and Pacifism” and his insistence that armed force is needed to “protect” the innocent is based on his understanding of what went down that first Christmas. “The Gospels tell us that after King Herod died, an angel appeared in a dream to Joseph in Egypt, telling him: ‘Get up! Take the Child and His Mother and go to the land of Israel, for those seeking the Child’s life are now dead.’  (Matthew 2, 19-20). The angel, it would seem, spoke prematurely, the Child, the Infant-Christ, was still in danger, is still in danger, is still mortally threatened, and is still being tracked down, right to this day.”

Of course Rolheiser’s point is well taken that “God still lies vulnerable and helpless in our world and is forever under attack. All forms of violence, of aggression, of intimidation, of bullying, of ego-parading, of seeking advantage, are still trying to kill the child… Herod may be dead, but he has many friends. The child is forever threatened.” But who are the “friends of Herod,” who are the “the criminals and psychopaths of this world” who are trying to kill the child? Just a few days ago, members of Upstate Drone Action dramatized the continuing threat to the Child Jesus in the gates of a New York Air National Guard Base that conducts armed drone attacks. As she was being handcuffed by police, the activist portraying Mary told the press, “If Herod had a Reaper (drone) Jesus, Mary and Joseph and I would have been incinerated.” Joseph, also arrested, noted, “The indiscriminate and illegal killings of so many holy families in the Mid-East must stop!” On this World Day of Peace, we are asked to reflect that it is precisely the “police and soldiers with guns” whom Rolheiser casts in the role of protector that are often the ones who threaten to kill the child.

The ones Rolheiser calls our protectors, even of the “radical pacifists,” are the same ones that Pope Francis labels “warlords.” But who will in truth protect “the Child, the Infant-Christ… still in danger, still in danger, still mortally threatened, and is still being tracked down, right to this day”? In his World Day of Peace message, Pope Francis quotes his predecessor, John Paul II, and raises up those who “by means of peaceful protest, using only the weapons of truth and justice”.   A peaceful political transition is made possible in part “by the non-violent commitment of people who, while always refusing to yield to the force of power, succeeded time after time in finding effective ways of bearing witness to the truth.”

From Pope Francis’ World Day of Peace message: “An ethics of fraternity and peaceful coexistence between individuals and among peoples cannot be based on the logic of fear, violence and closed-mindedness, but on responsibility, respect and sincere dialogue.  Hence, I plead for disarmament and for the prohibition and abolition of nuclear weapons: nuclear deterrence and the threat of mutual assured destruction are incapable of grounding such an ethics.” So much is at stake now at the dawn of the year 2017. The fate of the planet is in the balance as never before, as is the very integrity of our faith. We cannot waste our time hoping on a faraway unimaginable heaven where there is no war and Baby Jesus sleeps safely in his manger. What we desperately need is the disarmament that the martyred monks in Algeria prayed for.