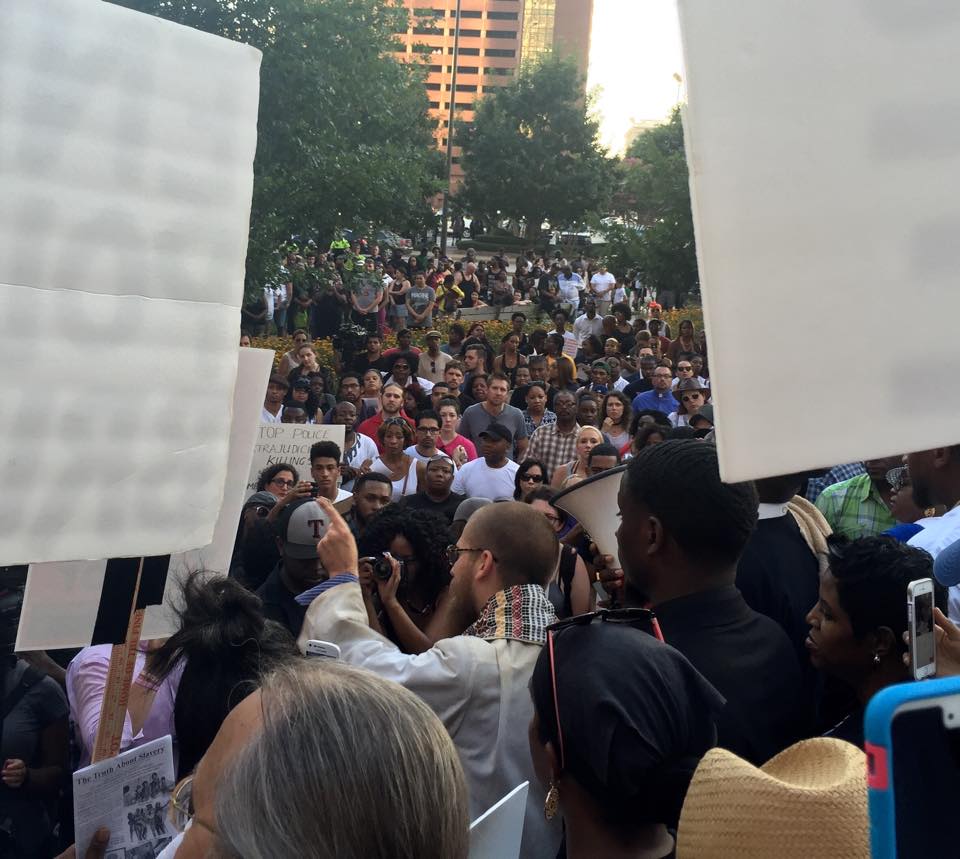 Writing used to be easy.  Now, nothing seems easy.  Leaning in, I just stare at the screen.  Occasionally, I try to type something.  Despite my desperation to write, my mind is held captive to a former place.

Bloody films never leave you.  Every image sticks.  The officer took his gun and shot Alton Sterling dead.  Amidst the screams, Philando Castile bled out.  Everyone wanted to talk about their lives, I couldn’t get past their deaths.  I wasn’t alone.  We put out a call.  Over a thousand people responded.

In the midst of misery, God is incarnate.  When we believe all is lost, God speaks from the bones.  The bones rise up and lead us on.  They did that night.

I was nervous about speaking.  When I opened my mouth, everything seemed clear.  Though I spoke for a long time, people have only remembered one phrase, “God Damn White America.”  The gathered understood the adaptation of Jeremiah Wright’s infamous phrasing.  The message of unity was simple.  The message of love was heard.  We must become one.  There is no White America.  There is only America.  Violence has a way of creating confusion.

Safety was at the front of my mind.  The Dallas Police Department guided the marchers through downtown with tremendous grace.  On multiple occasions, we stopped or changed routes to make sure that everyone had the chance to keep up.  I stayed at the front of the line.  In time, I settled into the rhythm of the movement.  Throughout the march, anything seemed possible.  Love and justice was within our grasp.  Then, confusion reigned.

Darkness was all Jesus knew.  The disciples professed their allegiance to him.  Now, they couldn’t even stay awake.  Unable to function, Jesus cried out in fear.  No one was woke.

Our march wound through downtown.  Stopping at the Old Courthouse, we took a minute to talk about the 1910 lynching of Allen Brooks.  There was no denying that the march for love and justice was long.  For a few seconds, I stared at the bricks.  What did they know?  What would they say?  How much further is the journey?  Organizers and the police shouted for me to run up to the front of the march.  I did.

For the next few blocks, I talked to a DPD Major.  In the midst of the rally and protest winding down, we talked about the success of the night.  The conversation felt natural.  There seemed to be a genuine connection.  A few steps past Austin St., everything changed.

Things seemed clearer before Babel.  Now, no one speaks the same language.  Confusion is all anyone knows.

“Pop-pop-pop-pop-pop…”  I heard it so clearly.  I’ve heard it ever since.  The shots rang out.  The violence was all that was clear.  Bullets flew in every direction.  Multiple people dropped.  The echoes only enhanced the terror of it all.  Pandemonium took over.  Grabbing my shirt to make sure I hadn’t been shot, I ran back toward the protestors.  I was terrified that a thousand people were about to walk into the middle of a shootout.  Throughout the evening, I carried a 10-foot cross.  At this moment, I used it as a shepherd’s staff and started swinging it around.  Screaming, “Run! Run! Active Shooter! Active Shooter! Go! Go!” I got as many people out of there as I could.

The march was beautiful.  Every step was about stopping violence.  Love and justice seemed so loud and so close.  Evil didn’t listen.  5 Officers were Dead.  Devastation set in.

For the next few days, I told my story on every major news outlet in the country and beyond.  The officers were never far from my mind.  Repeatedly, I reminded people that this was a nonviolent peaceful protest.  “Love” and “justice” were the only words on my lips.  I looked directly into the camera and declared, “Stop shooting America!”  I don’t know if anyone heard me.  Violence always confuses the ears.  I saw it happen.  I saw it happen again in Baton Rouge.  Former words are confused and present words are confusing.  We will not be able to understand until we stand down.

Oh God, deliver us from Babel.