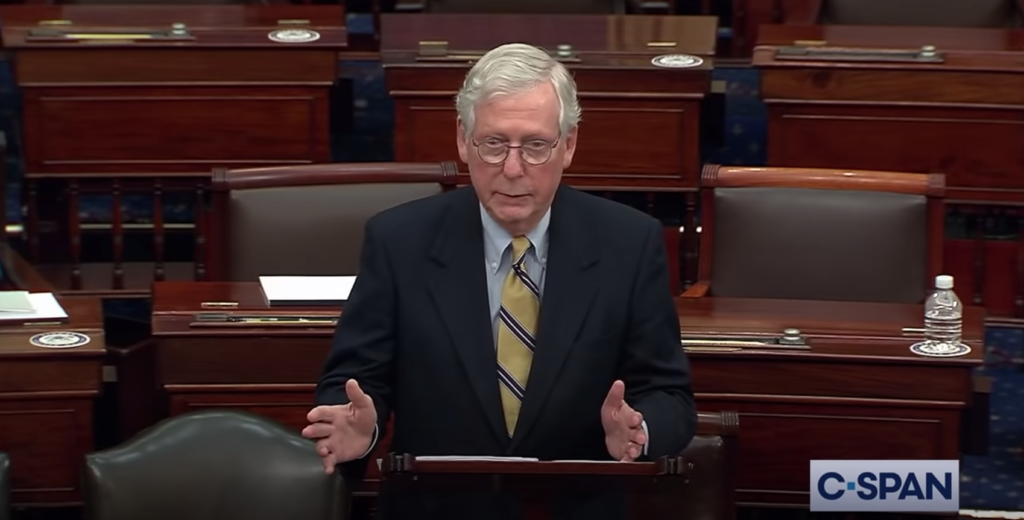 The Senate has spoken and has finally certified what we have long known: an overwhelming number of Republicans in what is touted as our nation’s most august legislative body are dangerously incapable of publicly affirming reality. They have chosen party over country and personality and violence over truth and accountability. In the process, they’ve treated the very definition of what it means to be a patriot with contempt. Meanwhile their Democratic counterparts celebrate the “most bi-partisan impeachment in history.” A vision of our dystopian future arises before us.

For days they gathered at the scene of a deadly crime to watch the video evidence of an offense that they themselves witnessed and experienced and then refused to hold the former president accountable for the words and actions that inspired the violence. The former president’s nearly all-white minions tasked with determining the fate of a white nationalist tyrant and his devoted white insurrectionists, spent their time hiding behind debunked theories of constitutionality and claiming to do this in the interest of “healing” our divided nation.

That notion would be laughable if it wasn’t so craven and demented. There is no healing without first acknowledging the sickness in the first place, and even then, healing requires truth and work. To borrow a phrase, everything else is fake healing.

Senator Mitch McConnell, the highest ranking Republican in the nation’s capital, capped off these twisted proceedings with what can only be described as a surreal bit of absurdist theater. McConnell, who had condemned the attack and the former president’s responsibility for it in the days after January 6th, brazenly attempted to take a moral stand on the floor of the Senate in a speech utterly devoid of moral content or witness.

The former Senate majority leader tried to once again condemn the attack while maintaining that the Senate could not convict because the articles of impeachment arrived after Donald Trump had already left office. His argument completely ignores the fact that while he was still majority leader and the former president was still in office, he refused to allow the Senate to take up the articles of impeachment. “If removal becomes impossible conviction becomes insensible,” he told his fellow senators, in a feat of pretzel logic attempting to erase history.

“Insensible” is the definition of the disinformation McConnell and the 42 other fellow Republican senators who voted with him expect millions of Americans to believe. Of course, despite McConnell’s reported disdain for the former president, this is simply a continuation of the alternate reality the GOP has been promoting among its base for years. It is a parallel universe in which markets are “free and fair,” poverty is a choice, and justice is equal and blind to race and class.

It is a worldview that begs the question: “What hope is there for peace in the U.S. when the president emboldens white supremacy and unleashes violent mobs, witnessed on international television, but the elected leaders with the constitutional power to hold him accountable and protect democracy cannot even agree on reality?”

[author] [author_image timthumb=’on’]https://forusa.org/wp-content/uploads/2020/09/emma-jordan-simpson.jpg[/author_image] [author_info]Rev. Dr. Emma Jordan-Simpson is the 26th executive director of the Fellowship of Reconciliation (FOR-USA), founded in 1915. Under her leadership, FOR-USA is adopting a reparative lens to pursue justice and racial reconciliation in the United States. Ordained by the Concord Baptist Church of Christ in 1989, her leadership among New York’s advocates and organizers has centered on advocacy for children. As executive director of the Children’s Defense Fund – New York, she worked with advocates to name and address New York’s cradle to prison pipeline crisis; prioritize youth justice within New York’s diverse faith communities; and close abusive youth prisons redirecting resources to invest in youth and their communities. Rev. Jordan-Simpson is a graduate of Fisk University, Union Theological Seminary, and Drew Theological Seminary. [/author_info] [/author]