U.N. Peacekeeping: Are There Other Avenues for Armed Conflict Resolution?

May 29, 2018 is the 70th anniversary of United Nations peacekeeping. The first U.N. peacekeeping mission was established on May 29, 1948 when the Security Council authorized the deployment of a small number of U.N. military observers to the Middle East to form the U.N. Truce Supervision Organization (UNTSO) to monitor the armistice agreement between Israel and its Arab neighbors. Seventy years later, 245 are still there.

Today, some 100,000 U.N. peacekeepers are deployed in 14 peacekeeping missions. Most are in Africa: Western Sahara, Mali, Darfur, South Sudan and Abyel (which is the third conflict related to the Sudan conflicts), Central African Republic, and Democratic Republic of Congo. There are three related to the Middle East: the original truce supervisions, plus Golan and the Lebanon frontier. There is an observation force related to the January 1949 ceasefire in Kashmir between India and Pakistan, a U.N. force in Cyprus, in Kosovo and in Haiti (which was more a stabilizing mission as there was not an armed conflict as such).

There are two major issues concerning U.N. peacekeeping forces. The first is how fast they can move when there are unexpected armed conflicts and can other multilateral governmental efforts move faster? The second and more fundamental question concerns what other peacemaking efforts are being made in addition to the U.N. peacekeeping efforts. It has been 70 years since the 1948 start and there are still questions of violence and tensions between Israel and its neighbors. Likewise, the Kashmir truce observation force has gone on nearly as long, and there are still tensions in Kashmir.

Thus we will look first at the unexpected Russia-Georgia armed conflict and how quickly the Organization for Security and Cooperation in Europe (OSCE) was able to move. Secondly, we will look at other possible approaches, in particular the use of unarmed peacebuilding teams.

The armed conflict between Georgia and Russia over South Ossetia and Abkhazia started on August 8, 2008, while many people were watching the start of the Olympic Games. This is a test case in real time of how fast governments can negotiate a ceasefire, a freeze on military activity and the deployment of external observers on the frontiers of Georgia, South Ossetia, and Abkhazia. The full team of European Union (E.U.) observers, some 300 persons, was to be in place by October 1st. As France had the presidency of the E.U. until the end of 2008, the French government had its team of 30 observers on the ground by September 25th, waiting for the full contingent of E.U. observers. The observers, while unarmed, were from military and internal security units.

During the first weeks of the conflict, there were only Russian peacekeepers. The Russian peacekeepers had been there since 1994, when an agreement was signed in Geneva among Georgia, Abkhazia, Russia, and the United Nations. The U.N. was to mediate in the Georgia-Abkhazia conflict along the Organization for Security and Cooperation in Europe (OSCE). The Commonwealth of Independent States was to provide peacekeepers – basically observers. The CIS States were quickly reduced to only Russia. There are no reports that the Russian peacekeepers tried to prevent the fighting between Georgian and Russian troops or between the Georgian and South Ossetia militias. The degree of government control over these militias cannot be known.

Could other types of observer or inter-position forces be used such as the proposed First Earth Batallion?

“I envision an international ideal of service awakening in an emerging class of people who are best called evolutionaries. I see them as soldiers, as youth, and as those who have soldier spirit within them. I see them come together in the name of people and planet to create a new environment of support for the positive growth of humankind and the living earth mother. Their mission is to protect the possible and to nurture the potential. They are the evolutionary guardians who focus their loving protection and affirm their allegiance to people and planet for their own good and for the good of those they serve. They are pioneers, not palace guards.”

There have been a good number of efforts to create nonviolent teams which could work internationally somewhat on the model that Mahatma Gandhi and his followers developed in India, the Shanti Sena, to work primarily in local communal tensions.  One of the first and most ambitious was the proposed “Peace Army” to be a “living wall” between the advancing Japanese Army and the Chinese defenders of Shanghai in 1932. The effort, based in the U.K., was offered to the League of Nations, but since the League was not planning to get involved, nothing came of the effort. Japan continued its conquest.

A second opportunity to show the effectiveness of nonviolent inter-positioning came in August 1981 with the newly created U.S.-Canada-based Peace Brigades International (PBI). In August 1981, there was a fear that U.S. troop movements in Honduras on the frontier with Nicaragua would be a prelude for a U.S. or a U.S.-aided attack on the Sandinista government of Nicaragua. PBI was able to draw upon an already existing team of people in southern California, some of whom were trained in radio transmission. The team had already trained together and built up a “team spirit.” The team was able top move out quickly. Negotiations with diplomats from Nicaragua and Honduras were carried out at the U.N. in New York as part of the PBI secretariat was in Philadelphia, in easy reach of New York. After the U.S. movements finished, the fear of a real invasion ended, and the PBI team was withdrawn. (1)

One never knows if there were serious U.S. plans for an attack or if support for the Contras was all that was envisaged. This experience showed the need for having an existing trained team and for good contacts with ambassadors at the U.N.  Given the crucial importance of close contacts with the U.N., I was asked to represent PBI at the U.N. in Geneva, which I did from 1982 until about 1996, when there were changes in the functioning of the PBI secretariat. For reasons I do not know, after the one experience on the Nicaragua-Honduras frontier, there was no further use made of the team from southern California. PBI recruitment was done on an individual basis. Teams were constituted when individuals arrived in the country of action. The PBI activity became focused on individual protective accompaniment of local human rights activists living under threat of abduction or assassination in Guatemala. (2).

During the 1980s, the Ambassador of Nicaragua to the U.N. in Geneva was one of my former students who kept me well informed about Central American politics.  We had discussions on the possibility of nonviolent defense against the Contras. While there was interest on the part of the Nicaraguan government, nothing was really put into place.

There were two situations with which I was deeply involved in discussions with U.N. officials: the large-scale refugee flow of Muslim Burmese to Bangladesh with the danger of a Burmese Army attack on the refugees, and the transport of relief supplies during the wars in ex-Yugoslavia. In both cases, several hundred people would have been necessary with only two weeks’ notice. PBI was not equipped to raise that number of people in that length of time.

Since the 1981 creation of PBI, a number of other organizations have joined the ranks of nonviolent peace teams, some with hopes of building a large reserve of well-trained team members able to go into conflict areas as peacemakers and actively use and share their conflict resolution and peacemaking skills. There has also been a growth in mediation and conflict resolution efforts, both in academic programs and in non-governmental organizations (NGOs). However, as we see in the Georgia conflict, “when the chips are down,” governments turn to other governments, not to NGOs. 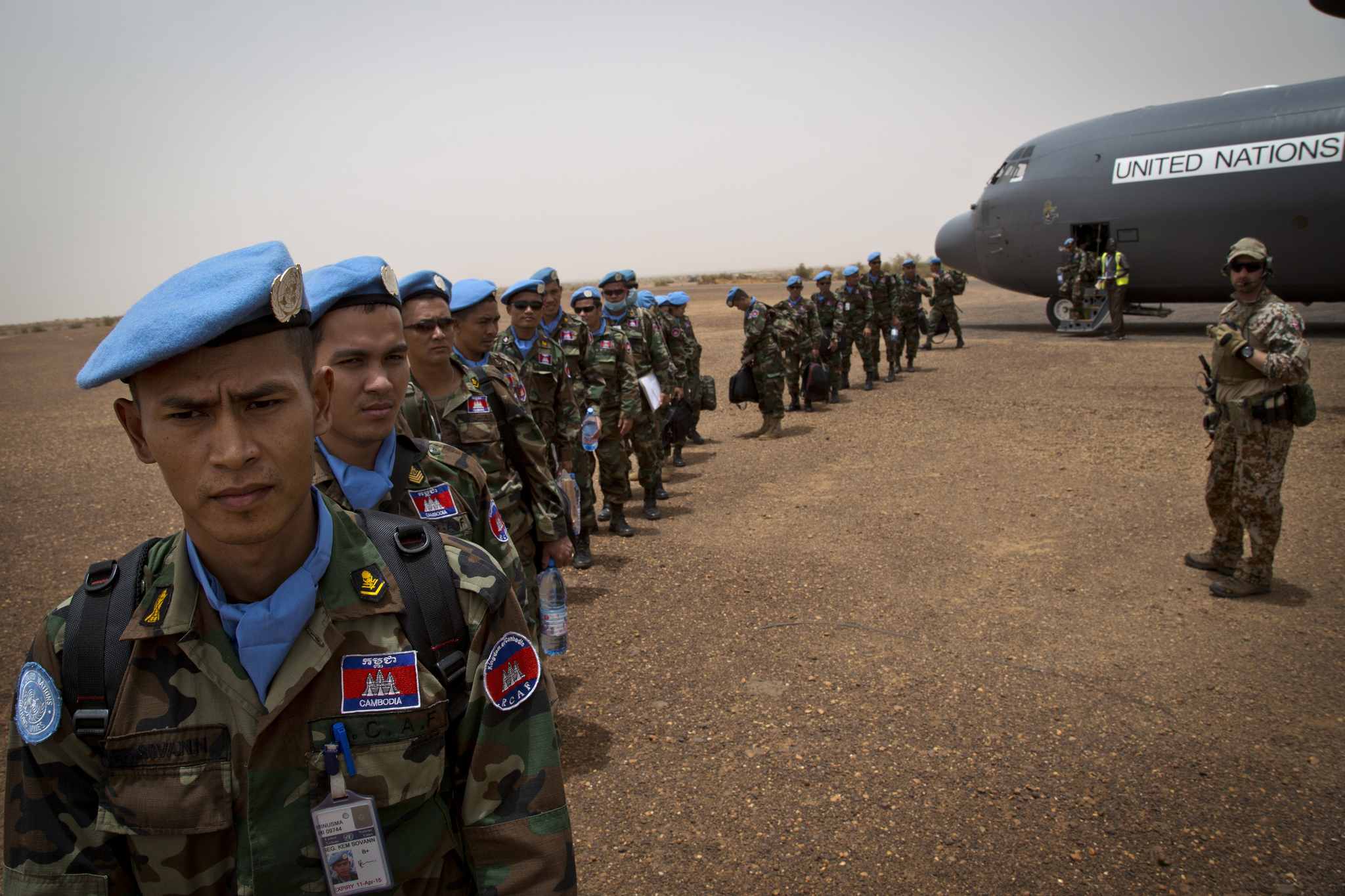 The confidence of governments only in other governments should come as no surprise. The world is still organized around the role of States, and both the diplomatic services and the military are trained to be state-centric. There is no non-governmental peacemaking organization that springs to the mind of a government official in a crisis situation, with the possible exception of the International Committee of the Red Cross, which is bound to governments by treaties which set out its rights and responsibilities.

As Brian Urquhart, for many years the chief political officer in the United Nations, has written “Peacekeeping depends on the non-use of force and on political symbolism.” The Red Cross is one of the most universally recognized political symbols. Even those who do not respect the Geneva Conventions know they are not supposed to shoot people with a red cross flag. Only the U..N flag has such wide recognition as a non-state symbol.

The second weakness of non-governmental peacekeeping is the lack of availability of people on short notice. While there are an increasing number of people who have studied in conflict resolution courses or have participated in efforts in the field, most have jobs, families, etc and cannot drop everything to live on the Georgia-South Ossetia frontier for three months. The military are sitting around waiting for something to do. The only civilian equivalents are monks. I had once thought that it might be possible to re-create the “fighting monks” of Japanese history. I saw teams of Christian, Buddhist, and Hindu monks all trained and ready to be deployed. For a while in the 1980s when there were a good number of communes, I thought about “New Age monks” who could play the same role. But I must not have been convincing enough.

The third weakness is related to the other two. The people on the ground who are to be protected or at least “observed” know what the military are. They may not like soldiers, but they have seen them before. Nonviolent peacekeepers without a recognizable symbol or uniform are unknowns and there is little time to explain.

There is currently within the U.N. an active discussion of U.N. peacekeeping efforts, their usefulness and their weaknesses. More attention to non-governmental peace teams may be worthwhile.

Photos: (1) U.N. Peacekeeping Missions: countries in dark blue are current missions, and those in light blue are former missions (Wikimedia Commons); (2) After receiving training from the U.N. Mine Action Service (UNMAS), a group of Cambodian peacekeepers serving as an Explosive Ordnance Disposal Company from the U.N. Multidimensional Integrated Stabilization Mission in Mali (MINUSMA), leave Bamako and head towards Gao, in northern Mali, where they will be deployed. Credit: U.N. Photo/Marco Dormino, taken May 14, 2014.