The Fellowship of Reconciliation is a national endorsing organization of the new Poor People’s Campaign, and FOR is excited to partner with and promote this timely, resonant campaign led and organized by grassroots, working-class peoples’ movements throughout the United States.

Last weekend, I took a four-hour bus trip from my home in Asheville, North Carolina to attend the annual “Moral March” known as “HKonJ” in the state capital of Raleigh. HKonJ stands for “Historic Thousands on Jones Street,” which refers to the street on which the legislature meets. 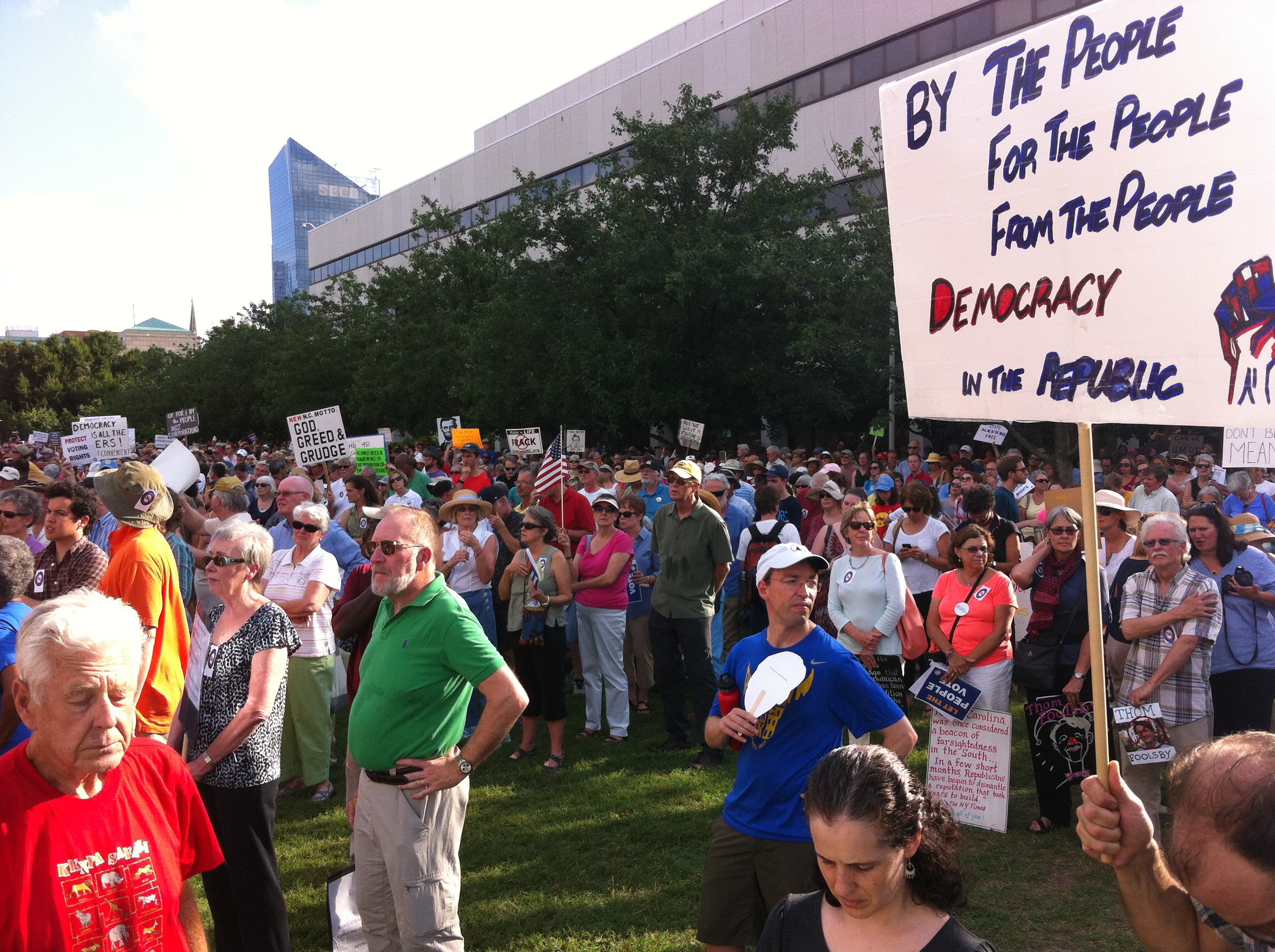 When my family moved to North Carolina in June 2013, it was right in the midst of the “Moral Mondays” movement that had caught fire that spring. Led by the state’s NAACP chapter, this dynamic, progressive fusion movement brought tens of thousands into the streets over the course of four months. Ultimately, almost 1,000 Carolinians were arrested in civil disobedience actions that took place each week in protest of the legislature’s right-wing policy decisions.

There were false narratives that emerged during that season, including the belief that this movement had “come out of nowhere” as a radical leftist resistance to the conservative takeover of the state house and governor’s mansion. In fact, the HKonJ mobilization had already been taking place for eight years before the Moral Mondays movement emerged in 2013. Those who claimed the movement was a partisan alliance with the Democratic Party, furthermore, did not recognize that HKonJ had been mobilizing for years during Democratic state leadership, in both the legislature and the governor’s office. Yet it was, indeed, a furious reaction to regressive, reactionary, and oppressive legislation in 2012-13 that caused the movement to reach a fever pitch.

The long-time leader of the North Carolina NAACP, and the founding head of the HKonJ and Moral Mondays movement, was Rev. Dr. William Barber. Now known nationally as the president of Repairers of the Breach and the co-chair of Poor People’s Campaign (with Rev. Dr. Liz Theoharis, co-director of the Kairos Centerat Union Theological Seminary), Dr. Barber is both charismatic and down-to-earth; at once a champion of a broad moral-centered vision for organizing while simultaneously focused on a legislative agenda that requires wonky attention to policy proposals and committee hearings. 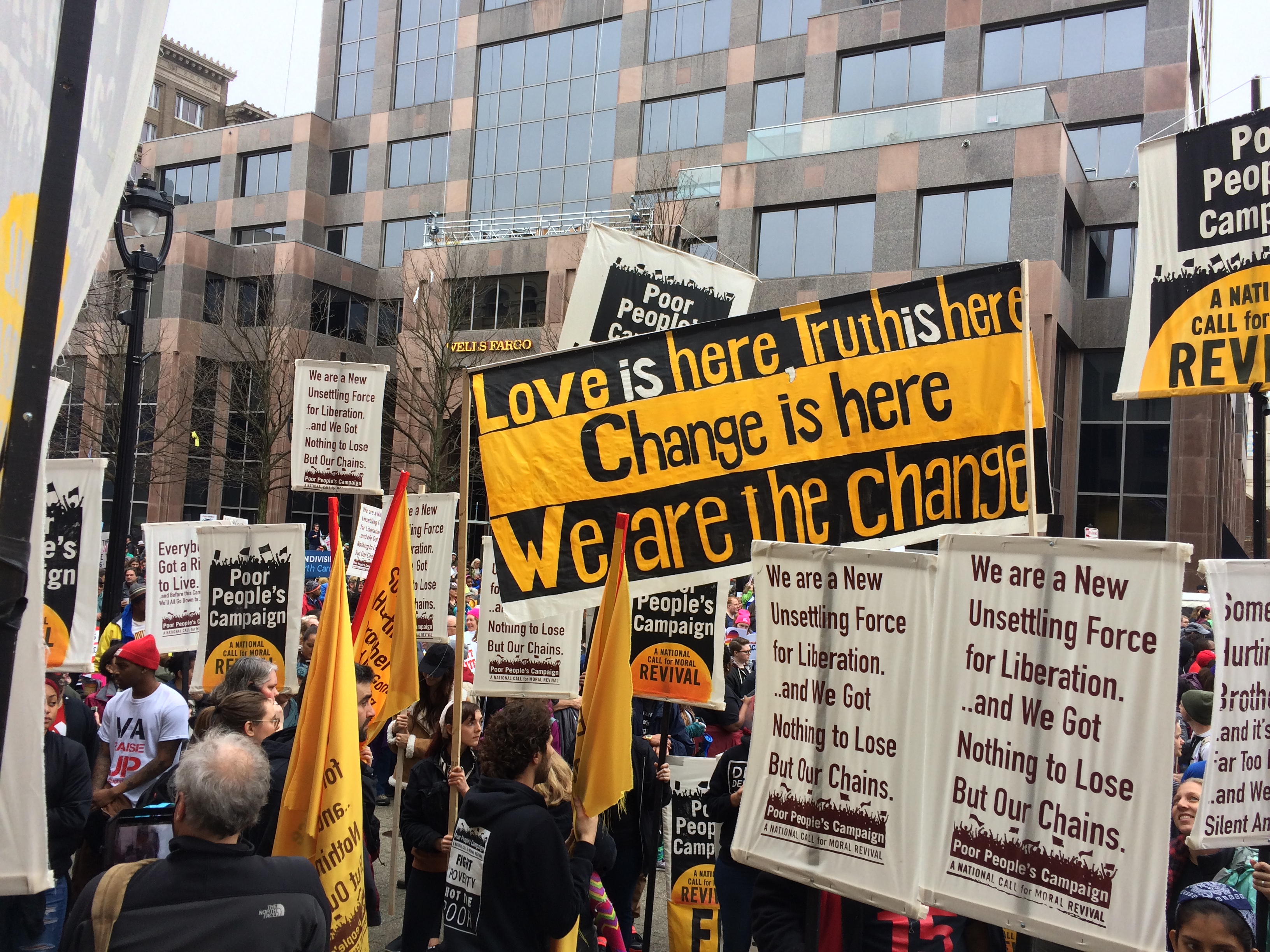 On Saturday in Raleigh, I was fortunate to catch up with one of Dr. Barber’s team: Stephen Roach Knight, who serves as director of denominational and faith-based partnerships at Repairers of the Breach. In a short, on-the-street video interview I captured through Facebook Live on my cell phone, Stephen describes the goals of the Poor People’s Campaign and what we can look forward to in the coming months.

I hope many FOR members are getting involved in their local city and state-based expressions of the campaign, and that we will all move “Forward Together!” (as the HKonJ/ Moral Mondays movement in North Carolina proclaims) to achieve dramatic victories for working-class-led movements around the nation this year.

[Photos courtesy of Ethan Vesely-Flad: (1) July 2013 during a Moral Mondays protest at the state capital in Raleigh NC; (2) February 10, 2018 at the HKonJ Moral March in Raleigh NC.]