The Fellowship of Reconciliation (FOR), the oldest interfaith peace and justice group in the United States, in conjunction with Interfaith Communities United for Peace and Justice of Los Angeles, hosted a special breakfast meeting on February 9, 2018 with Puerto Rican leader Oscar López Rivera during his tour of Southern California.

FOR National Co-Chair Matt Meyer, introducing Oscar and the gathering, noted that the worst disaster facing Puerto Rico this year was “not named Maria, not a hurricane, but the continuing colonialism and increasing economic attacks,” which have left the island truly devastated. “There can be no reconciliation without reparations, with resistance,” added Meyer — making reference to FOR’s Reparations Campaign that was launched at the end of January with a national webinar (audio recording here).

The connections between reconciliation and “revolutionary love” were also emphasized, as Oscar has been discussing the need for broad support to bring independence and sovereignty to Puerto Rico through the power of love. “Colonialism is a crime against humanity,” Oscar reminded participants, “and I am certain that Puerto Ricans have a love of our people, of love of our language, a love of our culture, of our nation.” 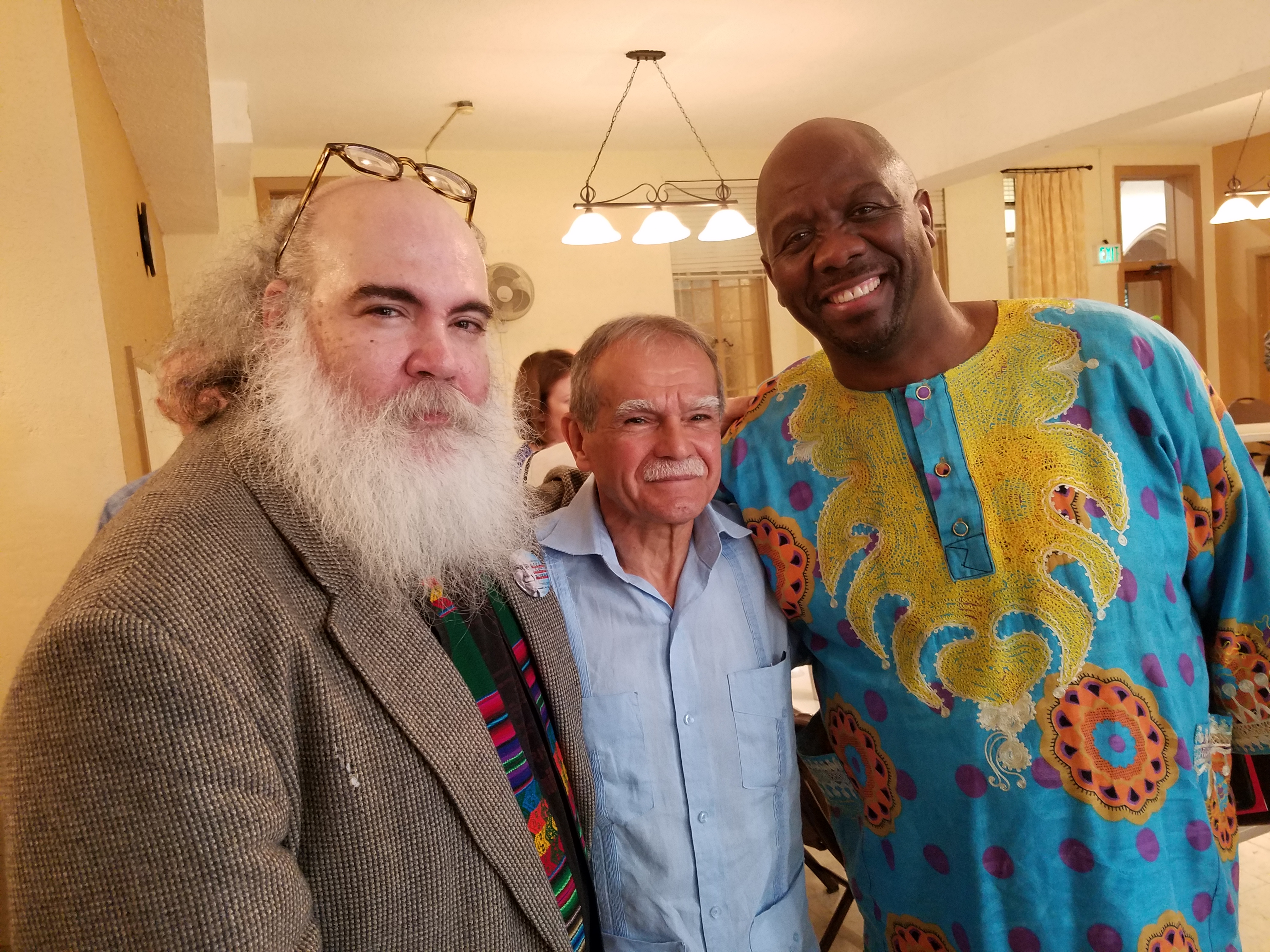 The gathering included remarks by Holman United Methodist Church’s Senior Pastor, Rev. Kelvin Sauls, whose personal history as a South African anti-apartheid activist made his acknowledgement of Oscar López Rivera as the “Mandela of the Americas” especially poignant. Holman UMC Church is of special significance in part because of the 25-year tenure of its Emeritus Pastor Rev. James Lawson, the iconic civil rights/Black freedom movement leader who Rev. Dr. Martin Luther King, Jr. called “the leading theorist and strategist of nonviolence in the world.”

Lawson, also formerly a FOR National Chair and currently leader of the James Lawson Institute that is working closely with the new Poor People’s Campaign: A National Call for Moral Revival, was unable to attend the breakfast due to family illness—but nevertheless had a strong presence in the room. Holman Minister of Community Engagement Rev. Oliver Buie spoke on behalf of Lawson, noting: 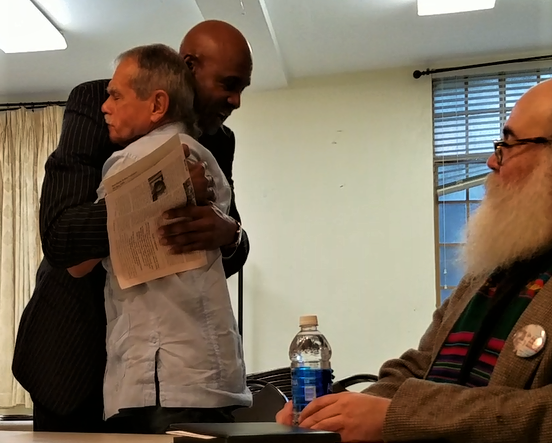 “We need to honor Oscar Lopez Rivera: I am deeply humbled to be in the room with such distinguished people. I’m in this fight because of people like Oscar. There would be no fight in me if there was no fight in him and in Rev. Lawson. They’re the ones who made it possible for these days and these opportunities to exist. It is very important that we make sure that the generations who come behind men like Oscar, like Rev. Lawson, understand this—because so many of the benefits that we have been fortunate enough to partake of are due to the work, and most of all to the sacrifice, that these men have made.”

Oscar’s remarks included reflections on attending a Chicago-based march led by Dr. King shortly after López Rivera returned from combat in Vietnam (as a decorated service member of the U.S. armed forces). Impressed by the serenity and sense of self-sacrifice surrounding King and those beside him, Oscar felt a strong sense of empowerment and that he could take part in and finish the march.

Though strongly affirming the U.N.-designated rights of self-determination for all colonized people, including the right to struggle against colonialism by any means necessary, Oscar spoke with pride of having “no blood on my hands: no human blood or even animal blood.” In fact, López Rivera joked, “I’d probably starve to death if I had to kill a chicken in order to eat.” Oscar was known to have become a vegetarian during his almost 36 years behind bars, as well as teaching himself to become a proficient oil painter and writer. Two books were published during his long incarceration: Between Torture and Resistance(including an Introduction by Archbishop Desmond Tutu and Prologue co-authored by FOR’s Matt Meyer), and Cartas a Karina (a bilingual series of letters written from prison to his granddaughter). 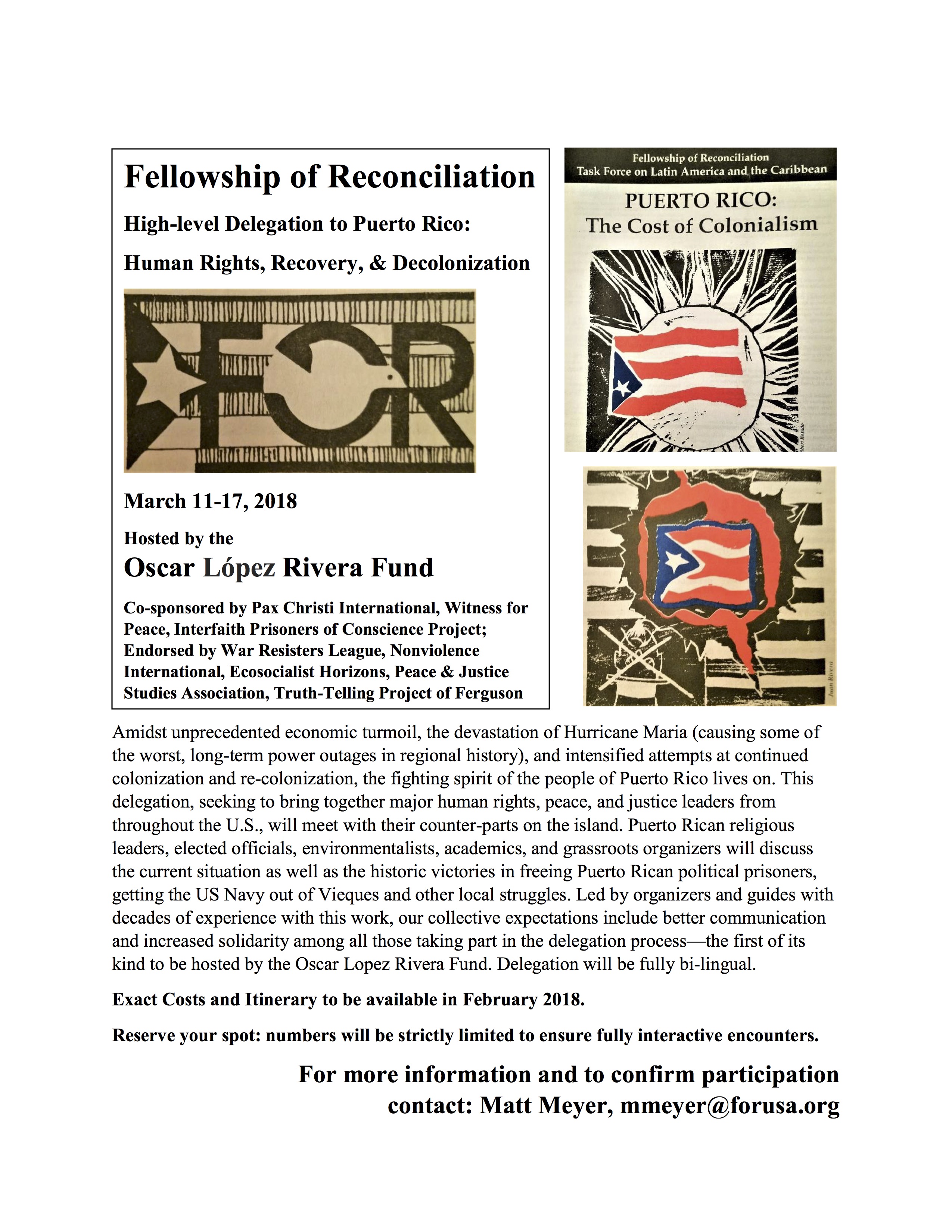 The Los Angeles-based meeting underscored the unity-building and solidarity work needing to be done with Puerto Rican grassroots leaders in this crucial period, part of a 2018 priority for FOR of providing emergency response support to communities in need. A March 2018 FOR-led delegation to Puerto Rico is being hosted by the Oscar López Rivera Fund, the first time the Fund has agreed to such a partnership. Co-sponsored by the leading Roman Catholic nonviolence network Pax Christi International, the trip is focused on examining issues of “Human Rights, Recovery, and Decolonization” and will visit a broad range of organizers throughout the archipelago from all walks of life and political perspectives. Pax Christi USA, the War Resisters League, the Interfaith Prisoners of Conscience Project, the Ferguson, Missouri-based Truth Telling Project, EcoSocialist Horizons, the Peace and Justice Studies Association, and Nonviolence International are all participating organizations endorsing the high-level delegation.

This spirit of internationalism, inter-sectionalism, and intergenerational movement-building was a core part of the ICUJP breakfast, with Rev. Stephen Fiske of L.A.’s Unity and Diversity Council presiding, and support provided by ICUJP Chair Stephen Rohde of Bend the Arc Jewish Partnership for Justice. Michael Novick of People Against Racist Terror, editor of Turning the Tidenewspaper, played a key role in the special occasion, but the over-riding sentiment regarding ongoing support for Oscar, for the people of Puerto Rico, and for all the movements we must build together, came from Rev. Buie: “Whatever we can do at Holman to continue the fight,” he proclaimed, “Just let us know.”