2018 Sanctuary Everywhere — Epiphany Season: A Liturgy for the Time of Manifestation

Epiphany Season: A Liturgy for the Time of Manifestation 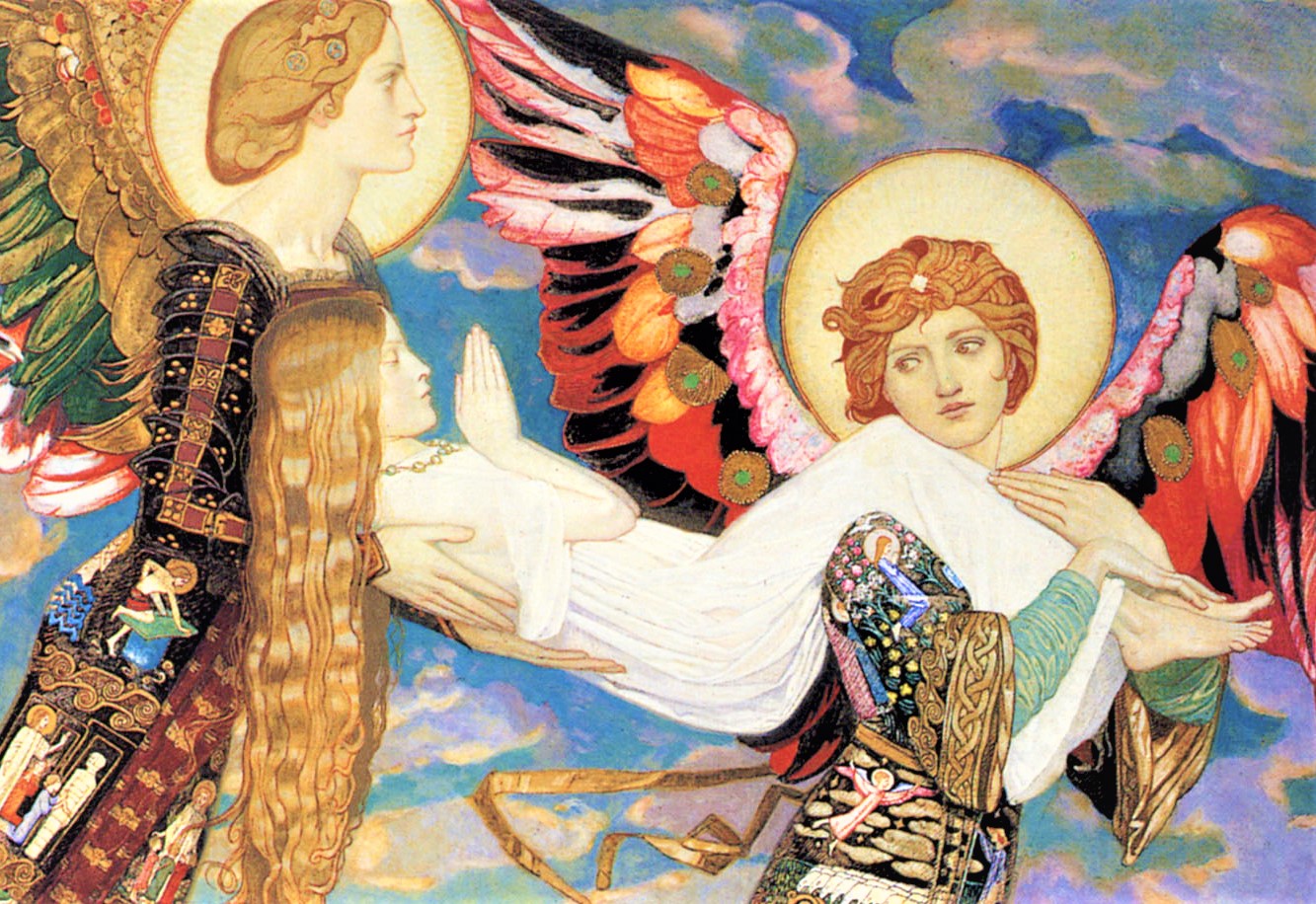 National Gallery of Scotland / St Bride (Detail) by John Duncan. The story is that Bride/Bridget was taken by the angels to the nativity to serve as a handmaiden to Mary (1) 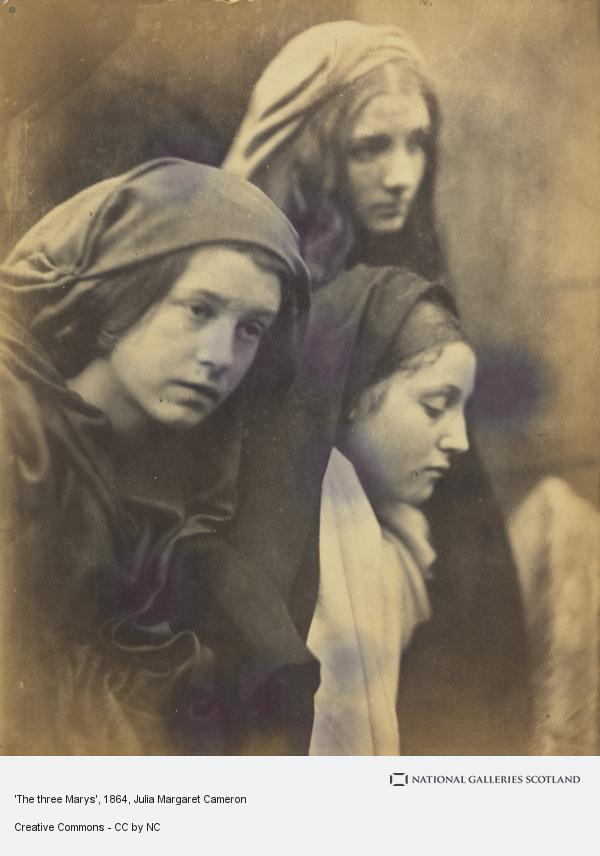 I would like the three Marys of illustrious renown
to be with us.
I would like the friends of Heaven
to be gathered around us from all parts.
I would like myself to be a rent payer to the Lord;
that I should suffer distress,
that he would bestow a good blessing upon me.

I would like a great lake of beer for the King of Kings.
I would like to be watching Heaven’s family
drinking it through all eternity.
I would like full vessels of charity (2)

A Prayer to the Turner of Time (Pagan Verse) 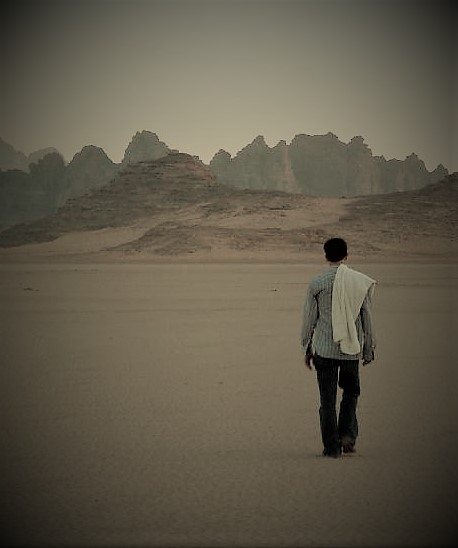 Hail Master of the sky road,
Brilliant Wanderer,
Architect of ages,
Wisdom-seeker,
wise in Your travels,
Ordering seasons,
Supporting the structure of worlds.

A shaman told me once you might be dead,
But I think instead
That you have hidden yourself away
In the wisdom-hall of time,
Not too far from the well of memory.

Hail twister of fate,
weaver of being,
Knotter of days
I hail Your children
and I hail You
Mundilfari, may You be honored. 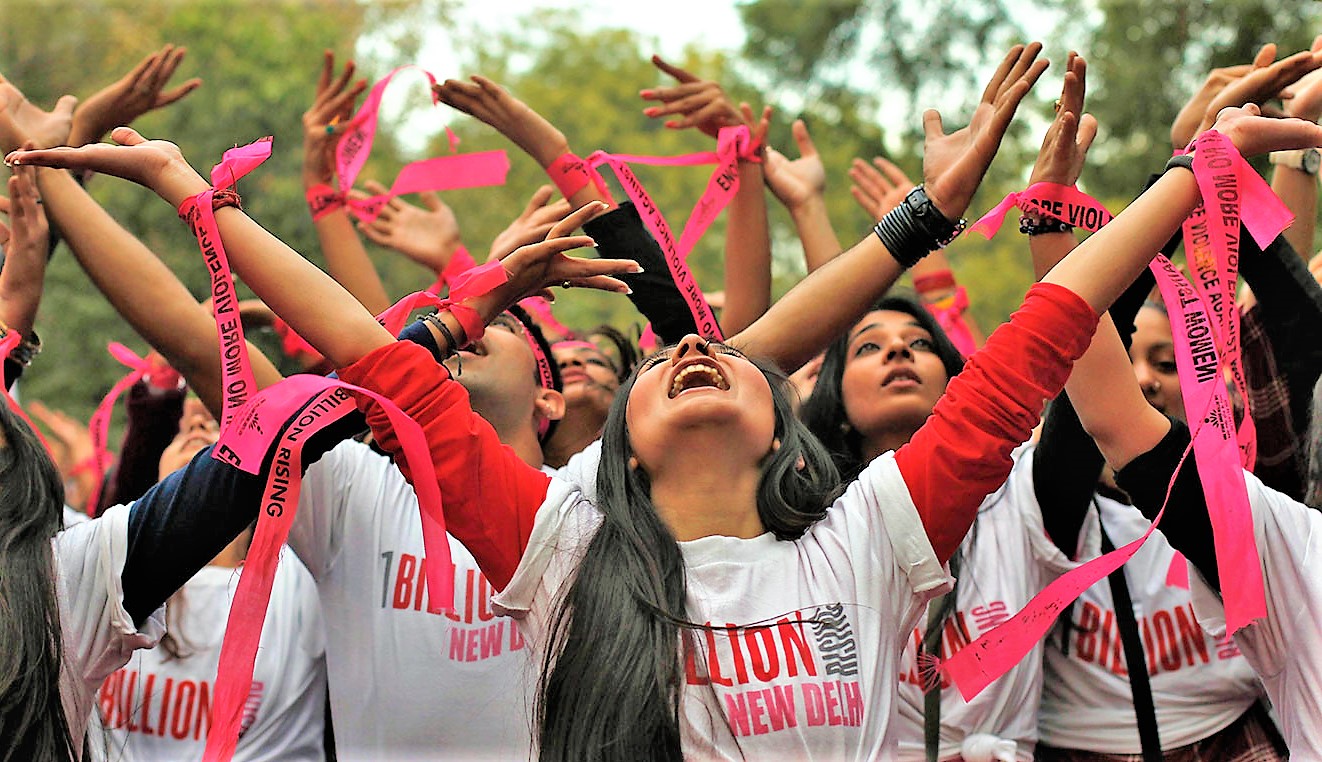 They always have
They persist and they resist — that’s what they do.

Being woke and…
Being transformational

One Billion Rising
No one left behind
None left blind

Saint Brigit of Kildare or Brigid of Ireland (Irish: Bríd; Welsh: Ffraid; c. 451–525) is one of Ireland’s patron saints, along with Patrick and Columba. Her name is also variously spelled as Brigid, Bridget, Bridgit and Bride and she is sometimes known as Mary of the Gael. Irish hagiography makes her an early Irish Christian nun, abbess, and founder of several monasteries of nuns, including that of Kildare in Ireland.

Her feast day is 1 February, which was also celebrated as Imbolc, a pagan festival marking the beginning of spring and the lambing season. She shares her name with an important Celtic goddess associated with that day and there are many legends and folk customs associated with both her and the goddess.

In art, Brigid is often depicted holding a reed cross made from the palm branches blessed on Palm Sunday. The cross is known as St. Brigid’s Cross. It is a symbol of peace. She often holds a lamp, which is called a lamp of learning and wisdom.

I was standing on the highest mountain of them all,
and round about beneath me was the whole hoop of the world.

And while I stood there I saw more than I can tell
I understood more than I saw;
for I was seeing in a sacred manner
..   the shapes of all things in the spirit,
..   and the shape of all shapes as they must live together like one being. 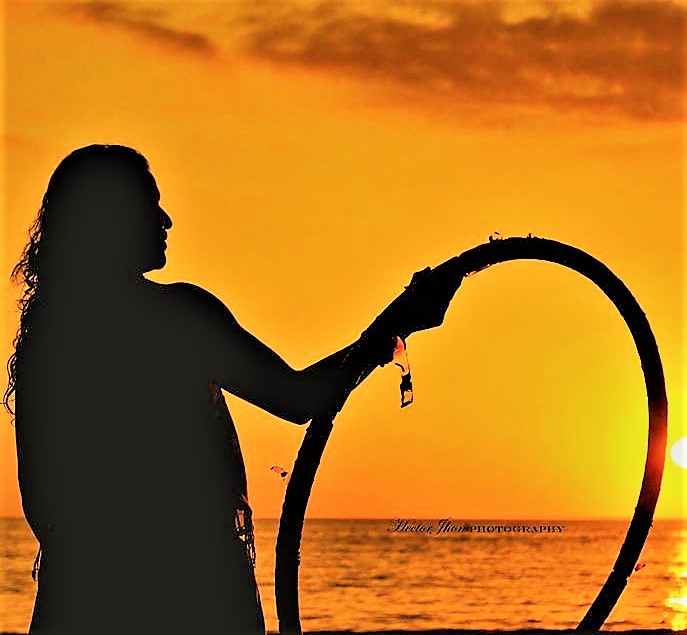 And I saw that the sacred hoop of my people
was one of many hoops
that made one circle,
wide as daylight
and as starlight,
and in the center grew
one mighty flowering tree
to shelter all children of one mother
and one father.

The sacred fire of hospitality

February 1 is the feast of St. Brigid of Ireland, a fifth century convert to Christianity, who was inspired by the preaching of St Patrick. As an abbess and Catholic nun, she founded a double monastery, of monks and nuns, at Kildare, the first women’s monastic community in Ireland.

Today is St. Brigid’s Day and all across Ireland people still adhere to the old tradition of mounting a St Brigid’s cross in a place of honor in their home, to protect against fire and evil spirits. The origins of the cross are the topic of today’s post.

St. Brigid is attributed with creating the distinctive form of the cross which bears her name. Known as an Irish Christian symbol, the original design was probably inspired by the pagan sunwheel.

The cross is most frequently made from rushes, but sometimes straw is used. A distinctive square of woven rushes is the centerpiece, from which four radials extend, each tied at the end.

As a school child in Ireland in the 1970s, we learned an old legend about how this cross came into existence. St. Brigid took on mythical significance in our young imaginations. We grew to love and admire her independent spirit, her determination and dedication to God. Here’s how the old tale goes. 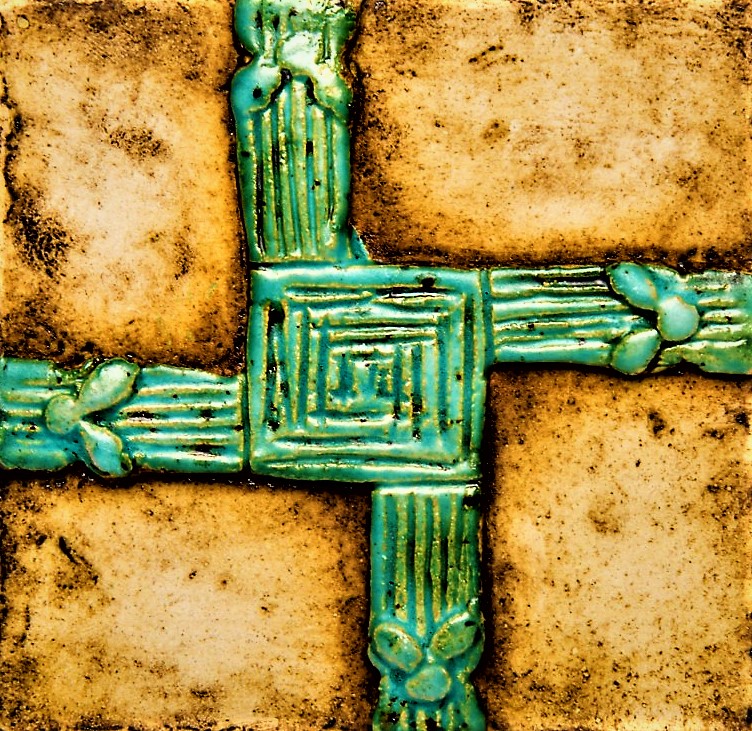 An old pagan chieftan lay delirious on his deathbed in Kildare. In some versions of the story this chieftan is her father. His servants  summoned Brigid to his bedside, in the hope this saintly woman might be able to calm his restless spirit.

As she sat by his bedside, trying to calm and console him, she picked up some of the rushes which were strewn across the floor of the room. As her fingers played with the dry strands, she started weaving them together, eventually forming a cross. 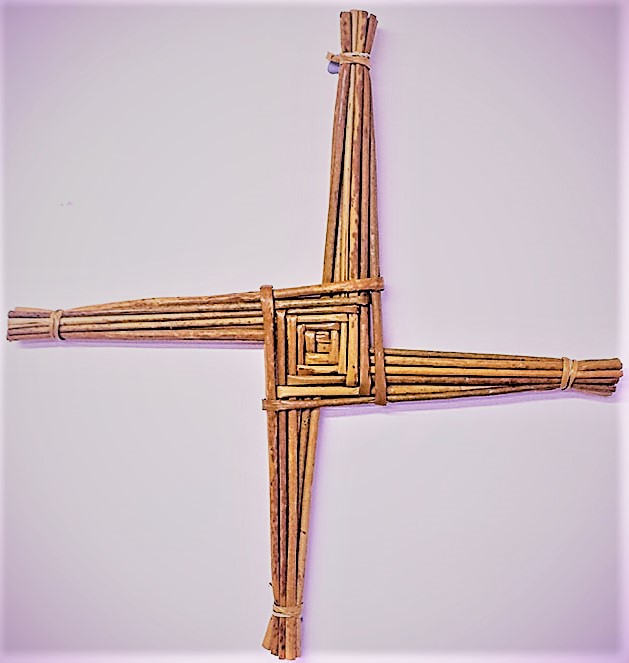 As she worked she explained the meaning of the cross to the sick man. Her calming words brought peace to his soul. The chieftan’s fever broke, and he grew quiet. Captivated by her lesson of love and enlightenment, the old chieftan was baptized as a Christian, just before his death.

Once word of his conversion reached beyond his lands, news spread fast. Ever since, Irish people have made rush crosses to commemorate the occasion.

I should like a great lake of finest ale
For the King of kings.
I should like a table of the choicest food
For the family of heaven.
Let the ale be made of the fruits of faith,
And the food be forgiving love.
I should welcome the poor to my feast,
For they are God’s children.

I should welcome the sick to my feast,
For they are God’s joy.
Let the poor sit with Jesus at the highest place,
And the sick dance with the angels. 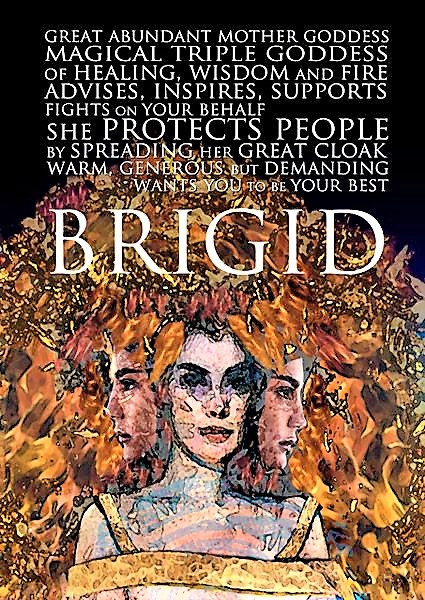 Prayer to St. Brigid of Ireland

May the mantle of your peace cover those who are troubled and anxious,
And may peace be firmly rooted in our hearts and in our world.
Inspire us to act justly and to reverence all God has made.

Brigid you were a voice for the wounded and the weary.
Strengthen what is weak within us.
Calm us into a quietness that heals and listens.
May we grow each day into greater wholeness in mind, body and spirit.
– Amen. 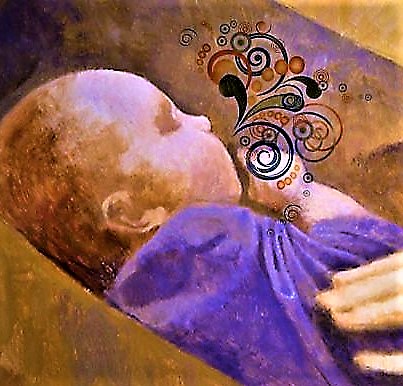 (1) There is another legend which says that when Jesus was born it was actually twins. The first child was a girl and God knew that a girl would never be able to do all S/He hoped so the girl was spirited away by the angels to begin the Celtic Church, where women were respected.

(3) Prayer traditionally attributed to St. Brigit, as quoted in Prayers of the Saints: An Inspired Collection of Holy Wisdom (1996) by Woodeene Koenig Bricker

(5) The Etins (Old Norse) are primeval beings of great wisdom, able to meet with the god/esses on equal terms.

(6) The Merseburg Incantations are the only surviving instance of pre-Christian, pagan, Old High German literature/theology. In the incantation, Sinthgunt is referred to as the sister of the personified sun.

(7) Prayer before a meal on the eve of St. Brigid’s feast day

(8) from the Columbine Memorial in Littleton, CO.