Orange jumpsuits have become the iconic symbol of a national disgrace and ongoing injustice: the detention center at Guantanamo Bay. These suits will be prominently displayed at demonstrations this January 11th, as activists in Washington, D.C. and in several communities around the country mark the 16th anniversary of the George W. Bush administration’s opening of the detention center in 2002. 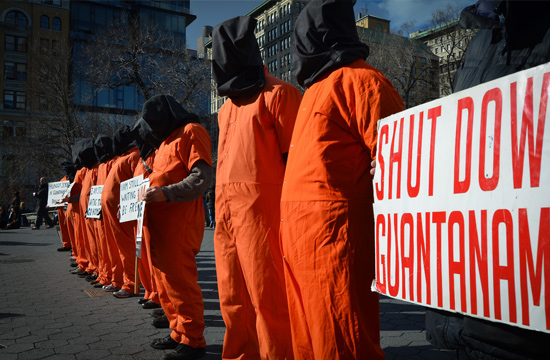 The message at these gatherings is adamant: Close Guantanamo.

President Obama pledged to do so when he first took office, but failed to keep that pledge; Guantanamo remains open. Over 780 individuals, cynically described as “enemy combatants,” have been detained there during these 16 years; very few have had charges brought against them. Most have now been released, but 41 still remain, stripped of their human rights. Among those 41 are five who have been cleared for release by the U.S. government; yet they still languish in Gitmo.

Once again, as it has done over these many years, the National Religious Campaign Against Torture (NRCAT) is helping to organize these events on the anniversary of the detention center’s opening. NRCAT, the inspiration of Princeton Seminary professor George Hunsinger, was founded in 2006 with a laser focus and a moral imperative: end U.S.-sponsored torture. More than 300 religious and peace organizations have joined NRCAT, representing the broadest possible swath of faith communities, from evangelical Christians to Sikhs and Buddhists, as well as representatives of the three Abrahamic traditions. (The Fellowship of Reconciliation joined NRCAT early on and continues to be a participating member.) 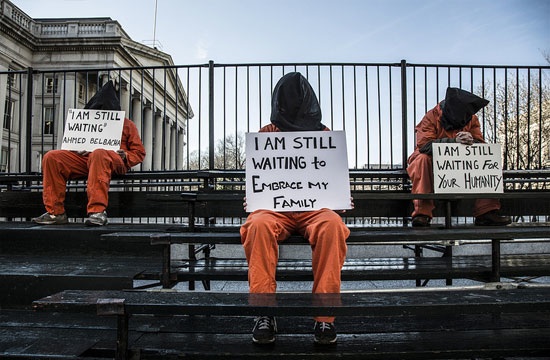 Naively, I thought that ending U.S.-sponsored torture would be a proverbial “slam dunk,” especially given the broad consensus of faith communities that torture is always wrong, without exceptions. But the roots of U.S.-sponsored torture, fertilized, as it were, by fear-mongering and by the dynamics of “othering,” a we/they mentality, with “they” being the so-called “worst of the worst,” run deep. Like invasive weeds, the practice of torture and the policies that justify it are a challenge to eradicate.

So after a few years, NRCAT staff and board recognized that the organization needed to be positioned and equipped for the long haul. We also realized that we needed to expand our work to include not just torture beyond the borders of the United States, but also torture within our borders, specifically the widespread use of solitary confinement in the U.S. prison system. In addition, NRCAT expanded its reach to address Islamophobia, helping to launch Shoulder to Shoulder to combat anti-Islamic bigotry. 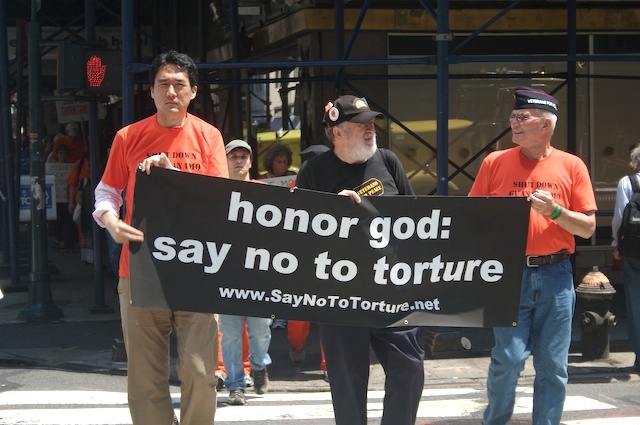 NRCAT’s mission – to abolish torture — is ambitious, given the cultures of fear and violence that infect U.S. society and psyches. But NRCAT has been tireless and tenacious. Through organizing, advocacy, public witness, and education, NRCAT staff, board, and member organizations have been making progress in changing the culture.

We were heartened when on the second day of his administration, President Obama issued an executive order rescinding the Bush-era program known euphemistically as “enhanced interrogation” and reaffirmed the U.S.’s commitment to the U.N. Convention Against Torture. But we knew then (and have seen again and again under the current administration) that executive orders can easily be overturned. So, in the years following, NRCAT pushed hard for legislation to secure the gains of President Obama’s executive order.

Along with other human rights groups, we advocated for the release of the Senate Intelligence Committee’s Torture Report, which documented the CIA’s involvement in torture. While we did not succeed in getting the full report released, we did succeed in getting the 500-page summary released; it is now public record. That was enough to provide momentum, along with unrelenting advocacy, for the passage in December 2015 of the McCain-Feinstein amendment to the National Defense Authorization Act. Their amendment codified the content of Obama’s 2009 executive order, requiring that the Army Field Manual on Human Intelligence Collector Operations be the standard for national security interrogations across the government and thereby ensuring that abusive practices cannot be authorized. Despite this law, NRCAT needs, and will continue, to be vigilant. Someone who brags that waterboarding is not torture, as Trump has done, requires close and constant vigilance and persistent resistance.

The progress of NRCAT’s campaign towards ending torture in U.S. prisons, specifically abolishing the practice of solitary confinement, has been considerable. There are currently campaigns in over a dozen states, with NRCAT resourcing them in a variety of ways. In some states – New York, New Jersey, and Pennsylvania for example – NRCAT has placed organizers, and it is planning to provide organizers for other states in the near term. NRCAT has also developed films like the documentary Breaking Down the Box to help educate folks about the pervasive reality of and torturous harms from prolonged isolation.

Breaking Down the Box from NRCAT on Vimeo.

One especially compelling NRCAT resource is a replica solitary confinement cell, which has been exhibited in a variety of venues nationwide. Last year, a coalition of Connecticut groups formed Inside the Box and brought the replica cell first to New Haven to display it in three libraries and then in the State Capitol in Hartford. Experiencing the cell for as few as five minutes was so disturbing that several legislators referenced their distress during Judiciary Committee hearings, speaking in support of a bill to restrict the use of solitary in Connecticut. The NRCAT replica cell helped us here in Connecticut bring this ongoing injustice and its enduring harms out of the shadows. The original bill was unfortunately, by the time it was passed unanimously, considerably watered down. So there is work still to do in Connecticut.

And there is work still for NRCAT to do to achieve its purpose of abolishing torture, without exceptions. There is work for us all to do. NRCAT is committed to that and is there to lead and resource and organize us to that end. We can accomplish this work, we must. As the NRCAT Statement of Conscience says, “Nothing less is at stake in the torture abuse crisis than the soul of our nation.”