The Physiological Impact of Fear: Finding Hope at a Newtown Memorial Vigil

I am here tonight for many reasons.

I am a grandmother of two boys, ages 5 and 7, and I want to make the world safer for them. I am a member of Grandmothers Against Guns.

I am also the coordinator of Cape Cod’s chapter of the Fellowship of Reconciliation, with which I have been involved on and off for the past 40 years – since becoming a pacifist under the mentorship of Dr. Jim Gould, my peace studies professor at Scripps College in Claremont, California. 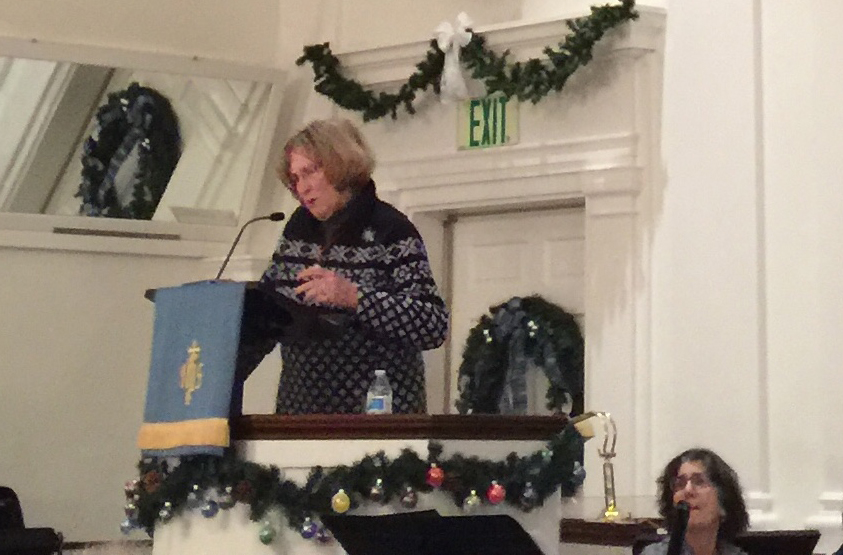 I am very blessed to still be working with Jim on the Steering Committee of Cape Cod FOR. Yes, he is 96! The thing is, Jim is a Quaker and an absolute pacifist who smiles all the time and doesn’t seem to have an angry bone in his body. I am not. Usually, I usually have a lot of angry and sometimes violent thoughts cross my mind when innocent children are killed because of stupid adults.

My anger usually fuels my activism. But in the last few years I have begun to feel numb, and I am worried because I think a lot of other people are too – and you and I need to do something about it. Did you know that since the mass shooting at Sandy Hook Elementary in Newtown, Connecticut, five years ago, the Brady Center tells us that there have been more than 1,700 mass shootings?

What I do know is that the Cape Cod Times put the recent Aztec High School shooting on page seven instead of the front page. When did mass shootings of our youth and children in their schools become old news? This whole situation is beyond imaginable to me.

I have few personal thoughts on the subject as a faith leader and activist which I would like to share with you tonight. They might surprise you, because they are surprising, even to me.

I don’t want to talk about the NRA, or background checks, or legislation, or mental health issues related to gun violence. I want to talk about something far more insidious, which, unless we are very mindful of it, puts a stranglehold on what is most important in all of our daily lives and the lives of families – and that is the many-headed monster of numbing fear.

Fear is not only isolating and alienating persons from each other across the globe, but it is also ripping our minds and souls into shreds and we have to stop it along with the glut of guns in our nation.

What is required is mindfulness about the fact that we and our children and grandchildren are being influenced by fear-mongerers on every side and we need to take personal and corporate action against them NOW.

As a faith leader I tell you start with the spiritual dimensions of fear, but I want to start with something far more basic … and that is the physiological impact of fear.

You see, our innate, life-preserving physiological response to fear is really simple: Fear shuts down the functioning of the complex problem-solving and creative abilities of the cerebral cortex. And my friends, when we then go to the functioning of the primitive brain, we have lost that which makes us uniquely human. You see, the sympathetic nervous system is designed to prepare animals either for fighting, fleeing, or freezing. Stress hormones from the adrenal medulla course through our bodies to preserve life in the face of a perceived life-threatening situation.

Today, I believe that many of us are simply frozen. Some of us joke about moving to Canada and a lot of us seem to get fighting mad on Facebook, but we remain captive to fear – and we freeze. A number of my clergy colleagues in denominational leadership are showing up to protest and get arrested by praying in governmental buildings in Washington, D.C., but I think it is fair to say that many people of faith are just quietly praying and hoping for a miracle. 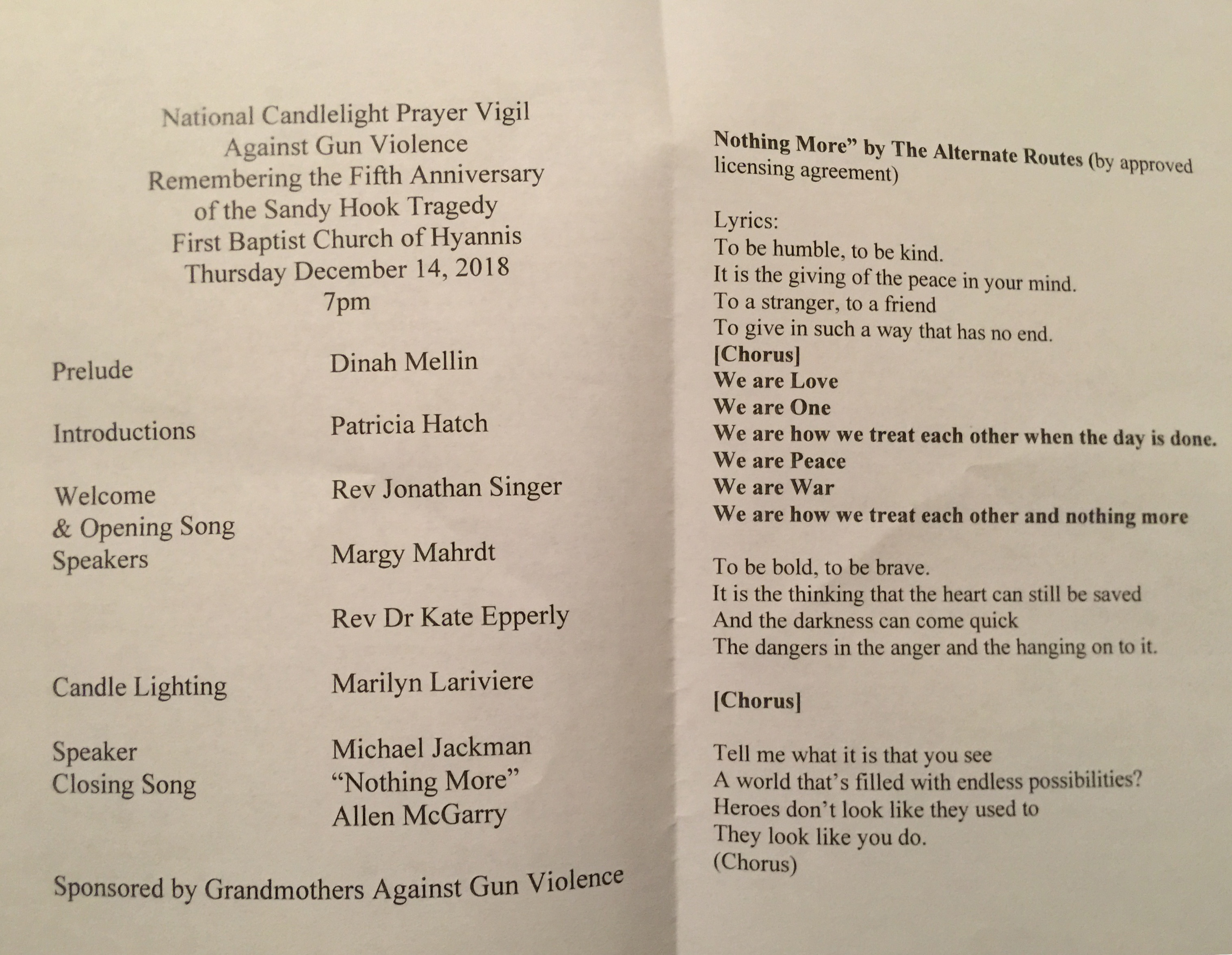 I am here to tell you that being pacifist, but also passive, just won’t do anymore. We need to wake up and hear the message that can be found throughout the Hebrew bible and the New Testament, “Do not be afraid; be strong and courageous, for I am with you.” During this Advent and Christmas season for Christians, we need to concretely, and with disciplined mindfulness, internalize the angelic affirmation saying, “Do not be afraid; for see – I am bringing you good news of great joy for all the people!”

When almost everyone and everything on television, in film, and most especially in the news media – not to mention politics – is designed to get our attention by shocking and scaring us; if we aren’t mindful to intentionally shut it out and re-program our hearts and minds – and the hearts and minds of the children in our midst – in a different, affirmative, and hopeful way, we will soon feel little hope.

We have to have hope. I have always said that “Hope is a pick and shovel virtue,” but today the cost of not doing this work is higher than ever before. When we go numb, we are not only unable to feel pain or joy or anything ourselves, but even worse, we are unable to feel anything for others. Empathy and compassion are in short supply.

I think this numbing effect is exacerbated by social media as well as high-tech work and play. It is disassociative, to use a clinical term. We and everyone else become objects – disassociated automatons – a danger to ourselves and others, and having guns around everywhere just makes things worse. I see this phenomenon behind the opiate epidemic and behind our youth’s increasing self-mutilation and suicide rates as well.

Personally, I found the answer to this plight a number of years ago in the work of pediatric cancer physician Gerald Jampolsky, who founded a whole movement of healing and wholeness called “attitudinal healing.” Its core concept is that the opposite of love is not hate, but fear. I have chosen to intentionally live by the affirmation that “love is letting go of fear” and I daily “soak” my psyche in positive affirmations.

As a pastor and as a person I have found much light and life by mentally focusing on and repeating positive affirmations over and over again. For me, of course, they are faith-based affirmations, but centering your consciousness on any affirmation of goodness and truth will do. The Bible is full of affirmations and proclamations one can adapt, and so is the internet.

Today I watched a video made by some of the parents and teachers of Sandy Hook Elementary School for this anniversary. One parent who lost a child said, “There is no silver lining in this situation, none at all. But if something … anything good … can come of it, then it will be all right.” Understanding that “Love is letting go of fear” is goodness of Sandy Hook that I want to share with you tonight.

Tonight I invite each and every one of you to take a couple of deep breaths and start consciously letting go of your fear. If you can’t do it, then start practicing some sort of discipline, or practice of meditation or centering prayer, and invite the children and teachers and pediatricians and police officers in your community to do it with you.

We need to reclaim a sense of empowerment beyond the primitive brain. In addition to using daily affirmations and breath prayer (counting to ten, as they suggest in anger management, also works!), I tell my grandsons that one day I hope they will take a nonviolent martial art, like aikido or tai chi, or learn a healing art like reiki.

There are so many wonderful holistic practices that can take us out of the fight, flight, or freeze primitive brain response, and give intelligent and caring humans a sense of courage, confidence, and empowerment. But today we must be very mindful of taking the “Calmer Choice.” It is time to “wage peace” in the manner outlined by peace activist David Hartsough (in his new book by that title).

Whatever your faith tradition – humanists included – if you have faith in the goodness of the human heart; if you care about the values of diversity affirming freedom, responsibility, justice, and compassion; then it is time to get disciplined and “wage peace” from the soul and psyche outward.

I will close with words of empowerment from the Apostle Paul’s Letter to the Ephesians (6:13-18) in the New Testament – which, until now, I have always felt were far too militant! (This translation is from The Message, edited by Eugene Peterson):

“Be prepared. You’re up against far more than you can handle on your own. Take all the help you can get, every weapon God has issued, so that when it’s all over but the shouting you’ll still be on your feet. Truth, righteousness, peace, faith, and salvation are more than words. Learn how to apply them. You’ll need them throughout your life. God’s Word is an indispensable weapon. In the same way, prayer is essential in this ongoing warfare. Pray hard and long. Pray for your brothers and sisters. Keep your eyes open. Keep each other’s spirits up so that no one falls behind or drops out.“

The translation of this passage that many people use today (NRSV edition) says, “Take up the whole armor of God!” Pacifism cannot mean passivity. This is a time to fight for peace and nonviolence, but my call to you tonight is to recognize that what we are fighting foremost is the many-headed evil monster of fear, depersonalization, and disassociation with which we and our children in this nation are unconsciously succumbing every day