James Baldwin once wrote that America is a burning house, and now it seems the fire is spreading. The rage in the words and the fury in the eyes of those who proclaim that they intend to make America great again brings fear to the hearts of the rest of us. As hate-filled white supremacists spread their violence and rhetoric in Charlottesville VA and elsewhere, it seems as if our past failures have “come home to roost.” 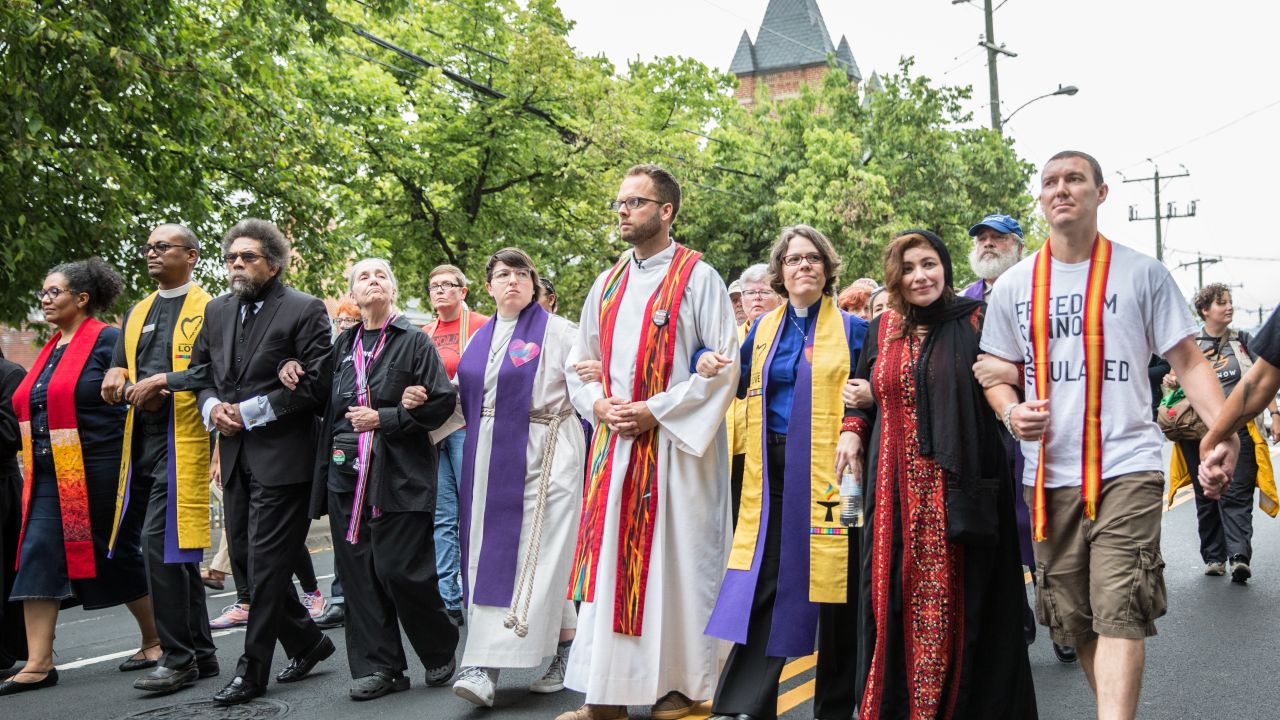 Both within and beyond the United States we are standing on the brink. Threats of violence being tossed back and forth between the governments of the U.S. and North Korea have taken us closer to absolute global disaster. President Trump tweeted: “Military solutions are now fully in place, locked and loaded”… the United States promised to deliver “fire and fury like the world has never seen.” These words are reminiscent of the violent, incendiary language heard at the start of the last world war.

We refuse to learn lessons from previous generations. The defeated nations of World War II, Germany and Japan, were required by the Allies to include education for peace and human dignity in their constitutions. Yet the U.S. did not deem these lessons necessary for future generations of American citizens. The result? The ideals of human rights and justice are lost to many who claim the U.S. as home.

But the promise of peace remains strong for many who work for a new world, emerging in the shell of the old. While both the U.S. and North Korea regimes have pushed the world yet closer to nuclear war, everyday people are looking for the security of fair housing, equitable education, freedom of expression, and freedom from both indirect and direct violence. Our needs include neither nuclear weapons nor militarized police.

Not all Republicans nor Democrats may support the current plans for war, but their demonstrated bipartisan support for endless wars has paved the way to hatred, xenophobia, and separation. Funding for the weaponry of war goes largely unchallenged in the corridors of state power, despite claims that there aren’t resources to help citizens on the margins fighting for survival or basic human needs. Tupac Shakur reminded us: “They got money for war, but can’t feed the poor!”

In the tradition of the faithful in our struggle for peace and human dignity, we stand outraged at the buildup of arsenals which are turned on communities of color, in the U.S. and globally. Instead of diplomacy and authentic humanitarian aid, the U.S. builds military bases abroad; rather than deal with the real economic issues of marginalized communities around our country, the U.S. hires thousands of more police and militarizes them.

Communities of Indigenous, African, LatinX, and Asian descent, including immigrant communities of whatever legal status, seek economic and political refuge while being targeted by the very institutions they support in tax dollars. We believe security will only be possible when U.S. congressional leaders and the occupants of the White House respect the ideals and laws guaranteeing equal protection under the law, in areas of education, healthcare, access to the ballot, and more.

Lasting peace will only come with the presence of justice, which includes reparations and reconciliation: admitting, atoning, and paying for the crimes of past generations that remain unaccounted. We must build an America of equality and peace which, in the prophetic words of Dr. Vincent Harding, “does not yet exist.” Failing to condemn the racial hatred and murder we saw in Charlottesville and that we see as a consequence of wars only drives us in the opposite direction.

We must stop the current crash-course towards disaster, and take responsibility, which the United States never has, for all the disasters which have gone before. Black Panther political prisoner Mumia Abu-Jamal recently stated “white supremacy is the mother’s milk of America,” and the U.S. government needs to counter this demonstrated legacy by making amends to each and every community they have harmed. In the meantime, they have to STOP THE WAR on people abroad and domestically.

From Bayard Rustin, James Lawson, and Diane Nash to Vincent Harding, Ruby Sales and many others, those representing the Fellowship of Reconciliation and our allies have worked to end war and to struggle for racial, economic, and all forms of justice. Rev. Dr. Martin Luther King, Jr. preached about all that was owed to oppressed communities, in speaking of the “check marked insufficient funds.” Later in King’s life, he described the triple evils of militarism, materialism, and racism in U.S. life, and developed a Poor People’s Campaign, which is being resurrected today by current interfaith and community groups, including FOR.

The path forward must be supporting independent economic development in communities on the margins, rather than spending U.S. tax dollars on endless wars. In our time, we call for economic conversion, for money to support infrastructure that makes schooling equitable and empowering, for universal healthcare, for housing as a right which stems the tide of gentrification and gerrymandering, for the release of political prisoners and an end to mass incarceration, and for communities which place power in the hands of the people, not the elite.

FOR calls the faithful to demand that the triplets of war, racism, and greed be challenged and consigned to the past. More than ever we must stand together for justice, to nonviolently challenge the endless war and racism we see both domestically and internationally. We cannot forget: we have the power!