The Root of War is Fear: Domine ut videam

Fear has driven people so far into the confusion of mass-thinking that they no longer see anything except in a kind of dim dream. What a population of zombies we are! What can be expected of us?…Only love can exorcise fear which is the root of war.

Jim Forest. The Root of War is Fear 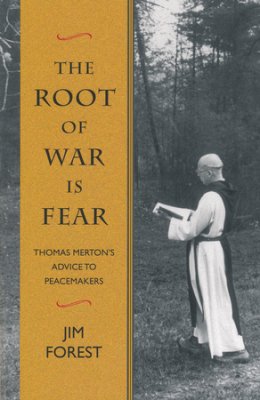 Thomas Merton was born in January 1915 under the sign of Aquarius, the symbol of the New Age, in Prades in the French Pyrenees, a town which became a holding area for Spanish Republicans fleeing Franco’s conquest as the next World War started In some ways, the signs of his birth became the lights of his life: Aquarius as the sign of the New Age is part of a myth of renewal, the Water Bearer who pours forth truth to those who are in need. The place of birth is also important in one’s astrological chart. Prades is later torn by war and later still is the home of Spanish exiles who wanted to be able to see Spain while waiting for the long power of Franco to end. Renewal of ancient truths and a search for peace were guidelines for Merton’s life.

Thomas Merton had as a young man an admiration for Mahatma Gandhi and the nonviolent struggle for the liberation of India. In addition Merton knew an Indian teacher of religious philosophy who lived in the New York area. Thus in the late 1960s, he turned to writing on his appreciation of Asian traditions, especially Zen and the Taoism of Chung Tzu.

However, the bulk of Merton’s search for renewal of old forms was within the Roman Catholic Church, a story which he tole in his widely-read 1948 book The Seven Storey Mountain. Merton became a monk at the Trappist Abbey of Gethsemane in Kentucky. The Trappist Order was at its start a reform-renewal movement within the larger Benedictine-Cistercian movement, placing an emphasis on devotion, silence, meditation and prayer, in many ways cut off from the world.

Jim Forest came into contact with Merton in 1961 when Jim was working with Dorothy Day at the Catholic Worker in New York. Both Day and Merton were concerned with the possibility of a nuclear war between the Soviet Union and the United States. Dorothy Day had been protesting since 1955 New York City civil defense exercises where the public was to go into subways and other underground places which they were to do in case of a nuclear attack. Children were supposed to hide under their school desks. Also in the early 1960s there was an expensive fad of building individual atomic shelters. Questions were raised, including in the Catholic press, if it would be moral to shoot one’s neighbor who tried to get into your atomic shelter when there was only enough food and water stored to care for you and your family.

Merton was highly preoccupied by the real possibility of nuclear war and hoped that the Catholic Church would take a more public stand opposing these totally inadequate civil defense measures which only created an illusion. The 1962 Cuban Missile Crisis added to these concerns and increased the sale of atomic shelters. I was working in Gabon, Equatorial Africa, in the early 1960s and so far from the then current fears in the USA. In the mid-1950s, I had been active against testing nuclear weapons in the atmosphere with its fallout that could get into the milk supply, but missed the early 1960s fears. Thus some of Merton’s and others writing on nuclear issues then seem overly apprehensive when read today.

The second peace concern of Thomas Merton, Jim Forest and the Catholic Peace Fellowship as developed in this book was the growing US war in Vietnam. Where the nuclear issue was a potential for violence, the war in Vietnam was a daily issue of destruction. “Vietnam – An Over-whelming Atrocity” was Merton’s statement about the destruction of lives, villages and habitat going on in Southeast Asia and how American perceptions of Vietnam were utterly divorced from human reality.

Through FOR, Merton came to know Thich Nhat Hanh who gave to Merton the struggle for peace in Vietnam a Vietnamese face. Both men were monks and Merton already had some literary knowledge of the Zen tradition. For both there was a need to work actively and publicly for peace and at the same time to work for peace within oneself through meditation and prayer. As Merton wrote “Prayer and sacrifice must be used as the most effective spiritual weapons in the war against war, and like all weapons, they must be used with deliberate aim; not just with a vague aspiration for peace and security, but against violence and war…The first job of all is to understand the psychological forces at work in ourselves and in society…This involves not only clear thought, lucid speech, but very positive social action. And since we believe that the only really effective means are nonviolent, we must learn nonviolence and practice it. This involves in its turn a deep spiritual purification.”

As Merton became increasingly concerned with the possibility of renewal within monastic traditions and with the evolution of Asian spiritual traditions, in 1968, he was allowed by his Order to travel to Asia to meet with spiritual groups and participate in an inter-religious conference in India. He died near Bangkok from an accidental electrocution. He was only 53, but his writings and example continue to be of real influence. As Jim Forest writes “Domene ut videam (Lord that I might see). Peace-making begins with seeing what is really going on around us, seeing ourselves in relation to the world we are part of, seeing our lives in the light of the kingdom of God, seeing those who suffer, and seeing the image of God not only in friends but in enemies. What we see and what we fail to see defines who we are and how we live our lives. The day-by-day challenge is to be aware of the divine presence in the other, struggling not to be blinded by fear.”