Erich Fromm: Meeting the Challenges of the Century

I believe that the One World which is emerging can come into existence only if a New Man comes into being – a man who has emerged from the archaic ties of blood and soil, and who feels himself to be a citizen of the world whose loyalty is to the human race and to life, rather than to any exclusive part of it, a man who loves his country because he loves mankind, and whose views are not warped by tribal loyalties.

– Eric Fromm, Beyond the Chains of Illusion

Eric Fromm (1900-1980), the psychoanalyst concerned with the relation between personality and society was born in 1900.  Thus his life was marked by the socio-political events of the century he faced, especially those of Germany, his birth place.

Erich Fromm was born into an orthodox Jewish family in Frankfurt am Main.  The families of both his mother and father had rabbis and Talmudic scholars, and so he grew up in a household where the significance of religious texts was an important part of life. While Fromm later took a great distance from Orthodox Jewish thought, he continued a critical appreciation of Judaism. 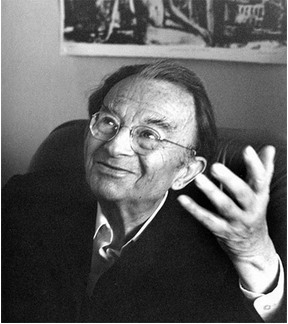 He was interested in the prophets of the Old Testament but especially by the hope of the coming of a Messianic Age – a powerful theme in popular Judaism. The coming of the Messiah would establish a better world in which there would be higher spiritual standards but also a new organization of society.  The Messianic ideal is one in which the spiritual and the political cannot be separated from one another. (1)

He was 14 when the First World War started and 18 when the German State disintegrated – too young to fight but old enough to know what was going on and to be impressed by mass behavior.  Thus he was concerned from the start of his university studies with the link between sociology and psychology as related ways of understanding how people act in a collective way.

As was true for German university students of his day, he was able to spend a year or a bit more in different German universities: in Frankfurt where he studied with the Frankfurt School of Critical Theory whose members he would see again in New York when they were all in exile, at the University of Munich, at the Berlin Psychoanalytic Institute, and at the University of Heidelberg from where he received a doctorate.

He had two intellectual influences in his studies: Sigmund Freud whose approach was the basis of the Berlin Psychoanalytic Institute and Karl Marx, a strong influence in the Frankfurt School.  Fromm chose a psychoanalyst path as a profession, learning and, as was required in the Freudian tradition, spending five years in analysis.  Fromm, however, increasingly took his distance from Freudian orthodoxy believing that society beyond family relations had an impact on the personality.  He also broke one of the fundamental rules of Freudian analysis in not overcoming the transfer of identification with his analyst.  He married the woman who was his analyst. The marriage broke after four years perhaps proving the validity of Freud’s theories on transfers and counter-transfers.

Erich Fromm’s reputation and his main books rest on his concern with the relation of individual psychology and social forces – the relation between Freud and Marx. However, probably the most fundamental thinker who structured his approach was the Buddha whom he discovered around the age of 26. It is not Buddhism as a faith which interested him – Buddhism being the tradition built on some of the insights of the Buddha.  Rather it was the basic quest of the Buddha which interested him: what is suffering?  Can suffering be reduced or overcome?  If so, how?

Fromm saw suffering in the lives of the Germans among whom he worked in the late 1920s, individual suffering as well as socio-economic suffering. For Fromm there must be a link between the condition of the individual and the social milieu, a link not fully explained by either Freud or Marx.

Fromm had enough political awareness to leave Germany for the United States just as Hitler was coming to power in 1933. From 1934, he was teaching in leading US universities. In 1949 he took up a post as professor at the National Autonomous University in Mexico, but often lectured at US universities as well.

Fromm’s work is largely structured around the theme of suffering and how it can be reduced.  There is individual suffering. It  can be reduced by compassion and love. One of his best known books is The Art of Loving. Love is an art, a “discipline”, and he sets out exercises largely drawn from the Zen tradition to develop compassion toward oneself and all living beings.

There is also social suffering which can be reduced by placing an emphasis not on greater production and greater consumption, but on being more, an idea that he develops in To Have or To Be. Fromm was also aware of social suffering and violence on a large scale and the difficulties of creating a society of compassionate and loving persons.  His late reflections on the difficulties of creating The Sane Society (the title of a mid-1950s book) is The Anatomy of Human Destructiveness.  We still face the same issues of individual and social suffering and the relation between the two.  Erich Fromm’s thinking makes a real contribution as we continue to search.