Viktor Frankl: An Inner Drive to Find a Meaning For Life

The last of the human freedoms is to choose one’s attitude in a given set of circumstances, to choose one’s own way… It is this spiritual foundation that cannot be taken away – that makes life meaningful and purposeful.

Viktor Frankl (1905-1997) whose birth anniversary we mark on 26 March was a leading psychotherapist in the humanistic psychotherapy school.  He was born in Vienna into a well-established Jewish family; his father was a director at the Austrian Ministry of Social Affairs. He had n early interest in medicine, especially psychotherapy, the ideas of Sigmund Freud and Alfred Adler being hotly debated in the student milieu. He joined the young socialists who were influenced by Alfred Adler’s views that persons were motivated to overcome a negative view of themselves due to class conflicts.

Frankl developed a lasting interest in the nature of suicide and deep depression having worked in the suicide prevention section of the General Hospital of Vienna.  Frankl also had a personal interest in philosophy and was attracted to the thinking of the Danish thinker Soren Kierkegaard and his concept that man had a “will to meaning”.  Frankl developed the concept in in 1969 book The Will to Meaning.

In 1937, in addition to his hospital medical work, he started a private practice as a psychotherapist dealing with cases of suicide and depression. He started to develop his ideas on the loss of meaning to life and for the need for life to be pulled by goals as well as drives – drives having been outlined by Freud and  Adler. 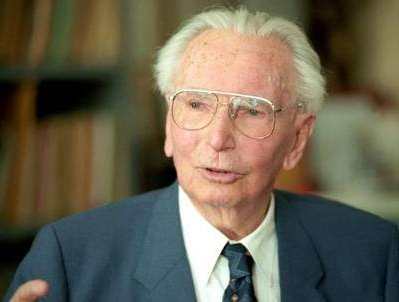 In 1942, Hitler began his Europe-wide drive for a “final solution to the Jewish question.”  In Vienna, Frankl, his parents, his brother, and his recently-married wife as well as himself were arrested and sent to different concentration camps. Viktor Frankl was in four different camps including Auschwitz which had become a “death factory.”

Frankl was liberated in 1945 and only then learned that his parents, brother and wife had been killed.  His experiences and observations in the camps reinforced his thinking on the importance of having a sense of the meaning of life.  As he later wrote,

“Each man is questioned by life, and he can only answer to life by answering for his own life; to life he can only respond by being responsible.”

On being released from the death camp, he wrote in a burst of energy in nine dayswhat became Man’s Search for Meaning, since often translated. It is the work most associated with his name.  He wrote a good number of other works, often developed from lectures that he gave in Europe and  the USA but none touched as wide a public as  Man’s Search for Meaning.  He remains as one who stressed the inner push to find a meaning of life and a spiritual core expressed by the voice of conscience.