After Hurricane Katrina, I remember going into neighborhoods devastated by the storm … and going onto the land on which people, now gone, had walked and lived. It was eerie; in spite of it being the middle of the day, these neighborhoods were deathly quiet. 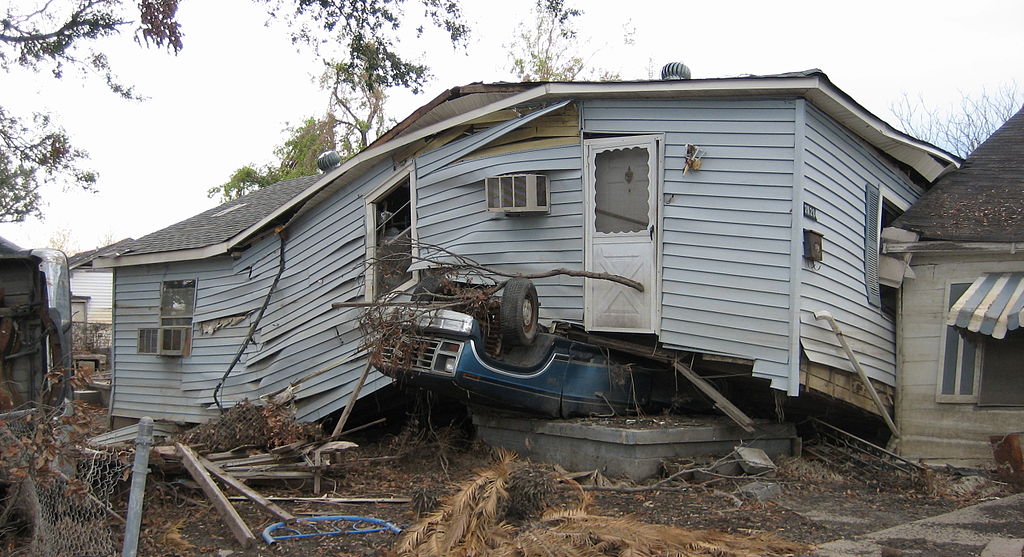 The remaining houses leaned and looked as though they were about to fall. The “X’s” on their doors indicated that they had been searched and that nobody was inside; there was another mark, if I remember correctly, that said that during the search, a body or bodies had been found. Overhead, there were wires on which could still be seen pieces of clothing. Refrigerators and toys and tricycles were strewn all over the place. There had been life here, that was clear, but the life that had been was gone.

Yet, there was still life.

Standing on the ground was what got to me. It was as though the spirits of those who had recently been walking on these same streets were walking with us. They were not gone. They were with us. The ground seemed almost mushy with the still living spirits of the people; indeed, sometimes, it felt like my feet were sinking in soft, soft soil, almost muddy. There was a pull and it was strong; it made me feel like I wanted to run away, but the pull was too great. The spirits would not let go.

I have felt that pull when I have driven past cotton fields in the South, or even as I have driven past forested areas as I am driving places in the South. The spirits of those who were desecrated on these lands in this country have never died. As I pass cities and towns, going down country roads or on highways, it’s as if I can see the ancestors, waving, encouraging me and others to keep on keeping on. I do not know these spirits, and yet I do. They are a part of me, and I, a part of them.

The Rev. Yvonne Delk spoke at the recent gathering of the Samuel DeWitt Proctor Conference in Richmond about “crossing the boundaries.” In her family, she always felt connected to her ancestors; her grandmother talked with her great-grandmother who talked with her great-great-grandmother. The truth of their lives and of their experiences was never forgotten and it served to strengthen them in difficult times. As she spoke my own spirit jumped. That “crossing the boundaries” was what I had been experiencing for the longest time, but not knowing what to call it.

Why is it important to understand how important is our connection our loved ones, gone on, and to our ancestors, whom we never met? It is important because the continuity that our ancestors give us remind us that there is hope. They remind us that they have lived wretched lives because of hatred and government and social policies which had no room for compassion and care … and yet they lived, survived and ultimately, thrived through us.

They remind us that we are no different than were they and that we have an obligation, as did they, to push through the pain of today to make a tomorrow better for children and grandchildren whom we will never see or know. They call us to continue the work. They call us to just imagine the tears they cried, the heartaches they bore, even as they continued to push against evil. They remind us that they exist because God is and that no government can ultimately beat God … but that God depends on us to work while it is still day.

The spirits of our ancestors are walking with us now. In Isaiah, the Lord says through the prophet, “Behold, I am doing a new thing! Can you not see it?” The ancestors know about “new things” happening in “bad times,” and as we walk on the very ground on which they walked, past houses in which they lived, and into prayer spaces in which they still reside, their spirits swell, as if to fill up our places and spaces of void and dread with hope and strength.

The “cloud of witnesses” is standing around us now, gently pulling us and then pushing us some, making us walk on ground which is holy and in its holiness, filled with the love and the strength and the power we need … for such a time as this. Our feet may be sinking in the mushy soil, but the soil on our feet will be the reminder that we are not alone. We are crossing the boundaries and connecting with those who know the road and the journey well, and we will prevail.

Though there has been death, yet there is still life.