See How We Live

Here in Kabul, I’m generally an early riser at the home of the Afghan Peace Volunteers, but I’m seldom alone. Facing exams, my young friends awaken early and then stay up late to study. Before sunrise this morning, eighteen year old Ghulamai sits in the kitchen, poring over his textbook. His efforts have made him number one in his class for the past three school terms. Now in the eleventh grade, he greatly hopes to continue his education, but his situation is precarious.

After sunrise each day Ghulamai heads out on his bicycle to the one-room home that his mother shares with four of his siblings. His bicycle has a rack above the rear wheel with a pillow fixed to it by bungee cord. His mother perches here each day as he carries her for the twenty minutes it takes to reach the three-story building where she works. Six days a week, she cooks, cleans, and launders for three well-to-do families who live here. Ghulamai will return to fetch her in the late afternoon, bringing her back to their room where her children have been waiting for her. The oldest, eleven year old Jamila, looks after them while their mother is away. 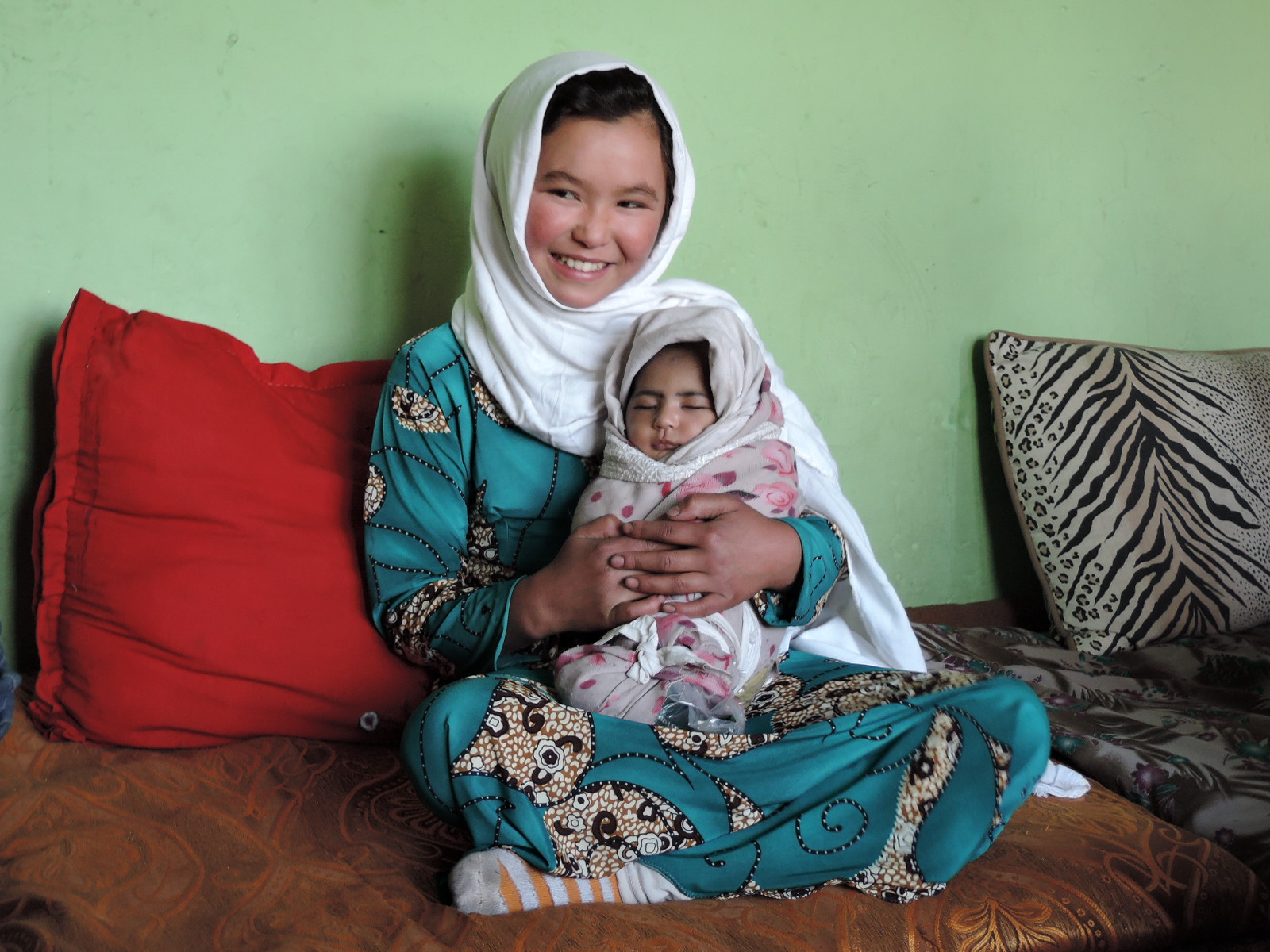 Last week, Henrietta (Voices – UK), Ali and I visited Ghulamai with his mother and siblings in this room.  Joining us in these snug quarters were two neighboring women and their small children. Ghulamai’s mother served tea to all of us as we sat together learning about the women’s experiences trying to survive in a country ravaged by war and corruption.

Ghulamai’s mother was desperate when she recently moved to Kabul from the more rural province of Bamiyan. Now, in Kabul, her earnings just barely cover rent and very simple meals for the family, but back home no amount of hard work washing other families’ clothes would earn enough for her family’s food and shelter. The cleaning work here is difficult, in no small part because one of her hands is badly mangled from a Russian air strike upon her own wedding. At the time, she was 11 years old. Shrapnel tore one of her fingers clear away, crippling her for life. Strikes at weddings and other civilian gatherings have continued under U.S. occupation, part of a daily traumatic onslaught permanently narrowing life choices for the most vulnerable people here, as war can be expected to do.

According to Brown University’s Watson Institute, approximately 111,000 people have been killed and an additional 116,000, at minimum, wounded during the 15-year U.S. war in Afghanistan.  The death toll from poverty, malnutrition, disease, and social dislocation can’t easily be neatly calculated for such a study.   Over 31,000 – nearly a third – of the people killed in fighting alone are local civilians.  The United Nations Assistance Mission for Afghanistan (UNAMA) counts more than 40,900 Afghan civilian injuries since January 2009.

What has the war accomplished?  In the U.S., it is hard for anyone to credit the lie that our rampage through the Middle East, begun in vengeance for the 9/11 attacks of 2001, has made anyone safer. In April 2016, the Special Inspector General for Afghanistan Reconstruction (SIGAR) reported to Congress only 70.5 percent of the country was in Afghan government control, and just three months later (July 30 2016), SIGAR noted that “the area under Afghan government control had declined by about 5 percent.  Violence occurs even in the areas ‘controlled’ by the government.”

Today we met with Kubra, Latifah, Shekibah and Naima, four local seamstresses struggling to get by in alarmingly simple dwellings, and I mentioned that many in the U.S. believe the war has allowed the U.S. government to help and protect women in Afghanistan. All four women disagreed, insisting that any aid from outside Afghanistan goes to people who will never share it with the needy.

“The U.S. may help the Afghan government,” said Latifah, “but all we see are new, fancy buildings.” It is difficult to see how, in the chaos and desperation war creates, women’s lives could be expected to improve. Pious talk about Afghan women’s freedom often ignores their greatest desire which is to find food for their children. When all we in the U.S. share is talk, when we demand transformation of people’s lives but choose then to destructively transform their society with airdropped bombs and missiles, plus millions of rifles and bullets, then our most impassioned talk becomes ridiculous and hurtful.

The APVs help the seamstresses provide for their children by giving them rice, beans and cooking oil once a month, but the women say no one else helps them. Two of these women are married to men who are disabled and the other two say their husbands can’t find work anywhere. During part of the year, the women do paid seamstress work in the APV duvet project and the blue scarf project.

As part of the APV effort to help people facing hunger, cold and little to no income. Ghulamai now coordinates their Food Bank. This project provides the monthly food ration the seamstresses mentioned, chiefly to families enrolled in the APV’s “Street Kids School.” By offering a food ration, the APVs allow these families to forgo the income their children could earn as child street workers and instead send them to government schools for half the day, no longer sacrificing their futures to their immediate survival.  It’s a fine project, and now some of the older street kids volunteer time on the APV’s other main project, “the Duvet Project,” through which women of no income can earn a wage sewing heavy blankets for distribution, free of charge, to families with little or no protection from the harsh winter.

Ghulamai once told me about an encounter he had with very young trash collectors who asked him if they could go through the trash bags he was wheeling to the local dump.  He agreed, and they salvaged a few scraps of bread and some paper that could be used for fuel. Then they sat down to talk with him. Pointing to a large new home, of the type referred to as a “poppy palace” since opium plays such a great role in building new fortunes here, one of the children said, “Look at that castle and at how those people live, and see how we live.”

In a way the child is pointing at those of us who live in the relatively comfortable castles in the west. An impossible gap exists between our demands for infinite security and the nightmare precarity suffered in those countries from which our wars rip that security away. It cannot be sustained, and our shaky existence in this poppy palace can only end with our finally waking up. We cannot remain high above the poorest abroad or the poorest here at home.  It’s much wiser to invoke the Golden Rule, to find satisfaction in living simply and sharing resources, and to become enlightened by truthful and altruistic youngsters who point us toward a better world.