Something to Teach Us About Living Well

As efforts to oppose the Dakota Access Pipeline grow, communities across the country are hearing from activists on their return from North Dakota and sending off fresh teams to lend support. The author believes that part of the support for the Standing Rock protests is a dawning consciousness that Native people have something important to teach us about living well on this planet.

On Sunday, November 6, in Redwood Valley, a tiny agricultural community in northern California known for its premium wine grapes and marijuana and its back-to-the-land ethics, cars spilled out of the parking lot at the local Grange and lined rural East Side Road in both directions for most of the afternoon. In an event sponsored by the Coyote Valley Band of Pomo Indians, several hundred people gathered to listen to activists report back from Standing Rock where they had stood in solidarity with Native American Tribes opposing the Dakota Access Pipeline. In a kind of relay race that is being enacted across the country, the event was also a fundraiser for another team of local activists who will leave shortly for Standing Rock. I was there with my wife, Sherrie, who is Mihilakawna Pomo and Bodega Miwok, and comes from an activist California Indian family. In the 1970s, her father, Bill Smith, led a dogged ten-year struggle to stop construction of Warm Springs Dam, which ultimately flooded his tribe’s homeland in Sonoma County’s Dry Creek Valley, a project that was sold to the public as flood control but which was actually designed to provide drinking water for development of Marin and Sonoma Counties, development which came, as promised, in a rush, and continues.

We were happy and surprised to see all the cars outside the Grange, but even still we weren’t prepared for the standing-room-only gathering inside. Roughly two hundred people listened as local activists talked about their experience at Standing Rock, about the banks who are funding construction of the pipeline, and about the spirit of the people gathered in North Dakota to oppose it. Many more people came throughout the afternoon to eat a hot meal, listen to music, watch Native American dancing, and give their support. 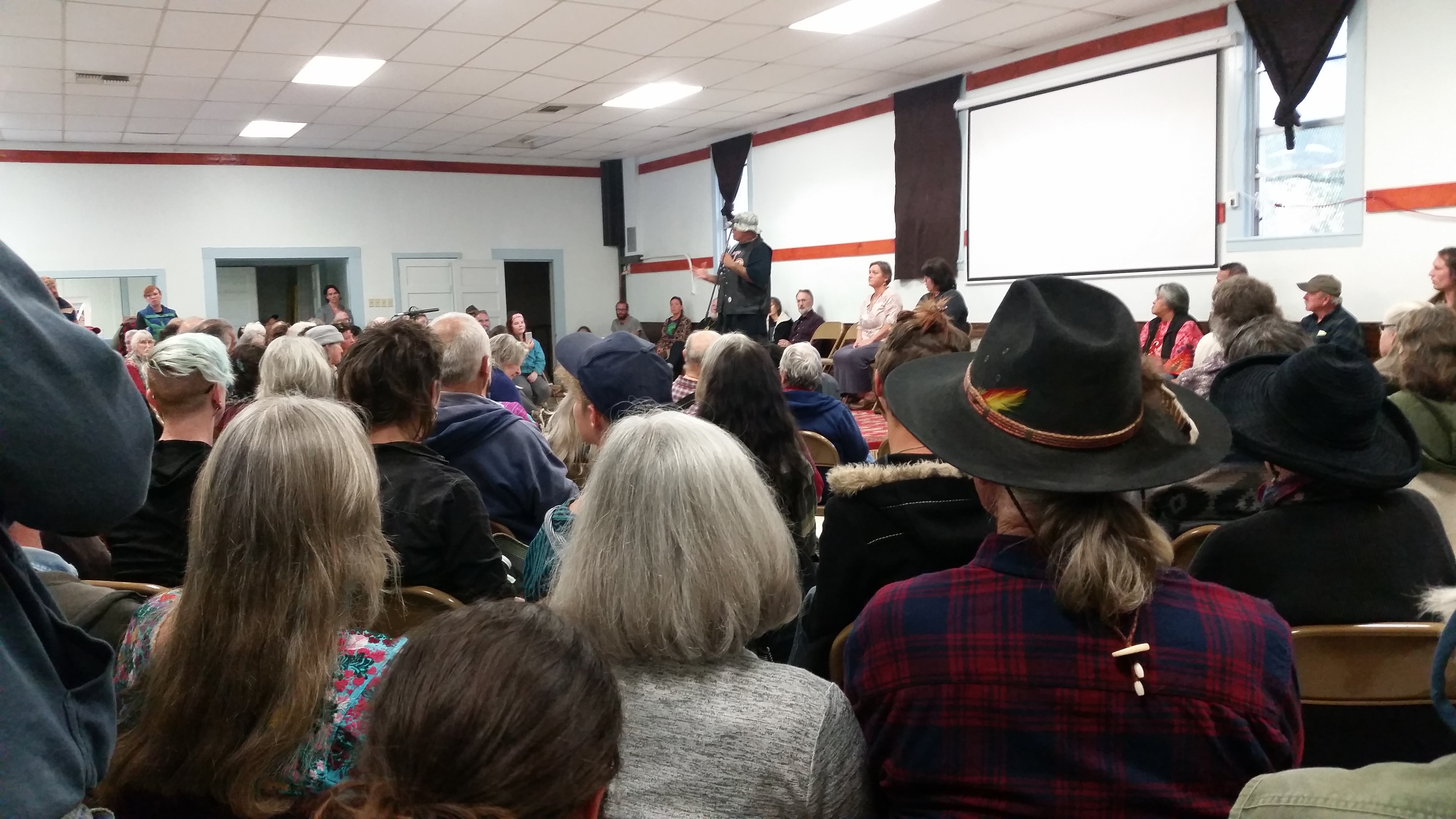 It was the largest gathering of people for a progressive cause that I’ve witnessed in the nearly twenty years I’ve lived in progressive though sparsely populated Mendocino County. These events are vital, not only because they educate and raise funds, but also because they connect us to actions and issues that are bigger than ourselves and to the people most directly involved in them.

A week earlier, as most of the people gathered at the Grange knew, police and deputies from six states had turned violent when arresting 141 water protectors who had, only a day before, staged a camp on private land in the direct path of the planned Dakota Access Pipeline. If we’ve learned anything this year it is that it’s ok to occupy federal land, but private property, perhaps especially if it is owned by a corporation spending a lot of money in your community, is another thing. Police shot activists, some of them children, with bean bags and rubber bullets, blasted them with pepper spray fired in thick jets from canisters the size of a fire extinguisher though meant to start not quench fires, assaulted them with LRAD sound cannons (long range acoustic devices), and wrestled them to hard ground, kneeling on their backs and binding their wrists with plastic zip ties.

Somehow, through all of this, almost all of the protestors remained peaceful, calling out to each other “Stand in your prayer,” and holding their ground. And where they didn’t remain peaceful, setting fires that burned a couple of cars, they were rebuked by the movement’s leadership. In a statement made after the arrests, Standing Rock Sioux Tribal Chairman Dave Archambault II makes it clear that no form of violence by anyone is acceptable.

“Militarized law enforcement agencies moved in on water protectors with tanks and riot gear today. We continue to pray for peace.”

“We call on the state of North Dakota to oversee the actions of local law enforcement to, first and foremost, ensure everyone’s safety. The Department of Justice must send overseers immediately to ensure the protection of First Amendment rights and the safety of thousands here at Standing Rock. DOJ can no longer ignore our requests…We have repeatedly seen a disproportionate response from law enforcement to water protectors’ nonviolent exercise of their constitutional rights. Today we have witnessed people praying in peace, yet attacked with pepper spray, rubber bullets, sound and concussion cannons…We need our state and federal governments to bring justice and peace to our lands, not the force of armored vehicles.

“We also call on the thousands of water protectors who stand in solidarity with us against DAPL to remain in peace and prayer.”

“Any act of violence hurts our cause and is not welcome here. We invite all supporters to join us in prayer that, ultimately, the right decision—the moral decision—is made to protect our people, our sacred places, our land and our resources. We won’t step down from this fight. As peoples of this earth, we all need water. This is about our water, our rights, and our dignity as human beings.” (Full article)

A few days after the gathering in Redwood Valley, Sherrie was at UC Berkeley’s Phoebe Hearst Museum, part of its Native American Advisory Council. One of her friends who was also on the Council, a California Indian artist and long-time activist, had recently returned from Standing Rock and planned to go back the next day. She would be taking supplies and the materials to erect a bathhouse, a way to help people, particularly the mothers and children among the protestors, get warm and clean. She told Sherrie,

“What you’re hearing about the way police have treated protesters is pretty much true, so is the depiction of protesters as peaceful. The front lines of the protest are mostly young people. When the word came to them that the elders were calling on them to step back, not to engage violently, that’s what they did.”

Sherrie asked her what people need. “They need basic things – first aid supplies for those providing medical care, particularly for protestors suffering from encounters with the police. And warm clothes, and believe it or not, things like ear plugs because the police are using sound as a weapon, and also the wind never stops and it’s so loud. I thought of all those depressed women in the Willa Cather novels…”

I am trying to understand why people are so taken with the Native American-led protest against the Dakota Access Pipeline. There have been countless worthy Native American protests over the years that have received only limited, local attention, including battles across the country to protect Tribal homelands. Last year while constructing an environmentally destructive, far-larger-than-necessary highway bypass around the city of Willits, CA, only a few miles north of Redwood Valley, Caltrans bulldozed a known Sherwood Valley Pomo cultural site, identified by archaeologists as CA-MEN-3571. An official Caltrans statement in November, 2015 reads, in part, “The site has, over the last four months, been severely impacted by the removal of topsoil and the installation of 1400-1500 wick drains. What little, if anything, remains of CA-MEN-3571 is now inundated with 3 feet of fill.” (Full Article) The immediate reaction was strong, but though the battle for the Tribe’s rights continues, the public’s attention has failed. And a week ago, three days before the event in Redwood Valley, Caltrans held a celebration to mark the opening of the Willits Bypass.

At the gathering in Redwood Valley, I listened while a Native American activist told us that opposition to DAPL shouldn’t be about moving the pipeline off-rez. It should be about an end to pipelines. It should be about the shift we need to make to alternative energy. No doubt nationwide support of the protest at Standing Rock is a complex, multi-faceted reaction. And no doubt it has something to do with the courage of Native people who are standing up to “big petroleum” in an era of growing consciousness and fear of climate change. Maybe we are, at long last, witnessing a dawning consciousness that there is something crucial to be learned from First Nations, a spark of recognition that the people who occupied this continent for twelve or fourteen thousand years without harming it may just have something to teach us about living well on this planet.