Khizr Khan’s DNC Speech Addressed the Soul of a Nation

Although there were hundreds of speeches delivered at the Democratic National Convention in Philadelphia, only one will be remembered past November. It was the one given by the parents of U.S. Army Captain Humayun Khan, who was killed in Iraq in 2004 when a car blew up after he told his troops to stand back. He took 10 steps forward to check out the suspicious vehicle himself, saving the lives of the soldiers he supervised.

His father, Khizr Khan, took the stage with Khan’s mother, Ghazala Khan, and totally ripped to shreds Trump’s ignorant portrayal of Islam. He described how Trump’s rhetoric is an attack not only on the dignity of grieving families but on the very principles which make the United States of America a destination for freedom seekers from all over the world.

At one point,  he asked Mr. Trump if he has even read the Constitution, which prompted the stoic father to pull his own personal copy from his jacket and wave it righteously in front of the cameras. The crowd went wild, and people from all over the world were stunned with admiration and gratitude. In terms of rebuking Mr. Trump’s policies head on, it was the most dramatic and effective moment of the DNC. As we have learned from subsequent debates and obnoxiously absurd Trump rebuttals, it may be ranked as a game changer this election, and also one of the most important speeches by a Muslim American this century.

Khan’s speech reminded Americans that this nation is also an Islamic nation. Service by Muslims in the United States military dates back to the American Revolutionary War; it continued with the War of 1812, the American Civil War, the Spanish American War, WWI and WWII,  Korea, Vietnam,  Afghanistan and Iraq, and the various conflicts being waged today. According to one survey, “At least 6,024 U.S. service members who declared Islam as their faith have served honorably in overseas war deployments since  9/11.” 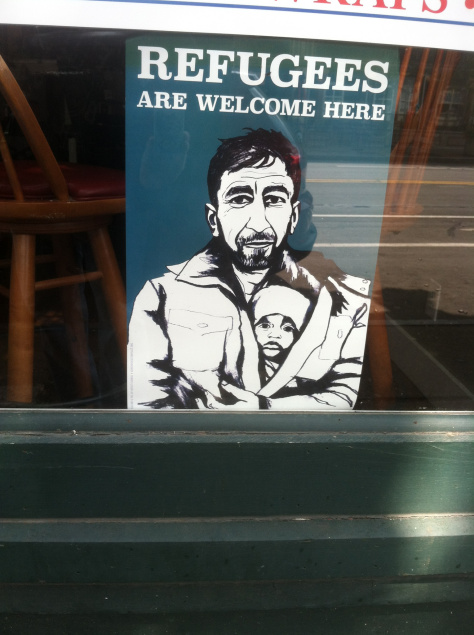 What Mr. Khan accomplished in his address went far beyond just an apology of his son’s patriotism and a tribute to the devotion of Muslim soldiers in the United States Armed Forces. Khan was reminding Mr. Trump that Islam is America. He was reminding Mr. Trump that America’s defense is the defense of Islam because there is no quintessential difference between the two. Mr. Khan was reminding the bombastic billionaire with a penchant for disgracing a religion he knows very little about, that this country is just as much their country as it is his. Lastly, he was reminding the nation at large that the insidious notion that Muslims are somehow guest contributors to “our” national story is dangerously misleading. Who belongs to this “our”? In his sensationally potent address, Khan reminded all of us that America is America because Muslims have contributed their time, labor and talents to make this a nation worth contributing to.

When the first Muslims came to the land that would become the United States is unknown, but many historians agree that the earliest Muslims came from the Senegambian region of Africa in the early 14th century. They were Moors, removed from Spain, who traveled to the Caribbean and likely to the Gulf of Mexico.  Even Columbus, when he sailed for the West Indies, took with him a manuscript written by Portuguese Muslims who had navigated their way to the New World in the 12th century. Many historians also contend that Muslims accompanied the Spanish as guides to the New World in the early 16th century in their conquest of what would become Arizona and New Mexico.

What is undeniable is that the first real wave of Muslims in the United States were African slaves. This is what Trump doesn’t get. Islam is not a foreign entity vying for credentials to get in. Muslims are not refugees. Putting aside the not so trivial point of law that people who pray to Allah do not need to prove their allegiance to be American- after all no citizen should be required to prove their religious allegiance to be American- an objective view of American history reveals that Muslims have been here since the beginning as forced laborers in a global system of oppression. Muslims have been part of the American story before the book was even really started. Certainly long before the arrival of Trump’s European ancestors in America, Muslims were here growing crops, building infrastructure, developing cultures, and transplanting their deepest hopes and dreams onto a landscape that must have felt strange, terrifying, and utterly fantastic.

With this history as a subtext, Khan’s speech was so crushing to Trump because it not only enshrined a Muslims’ inherent right to be counted as a valuable member of American society, it also demolished the very biases and stereotypes which those doubt laden questions are founded on. Every sentence out of Khan’s mouth was further evidence that he was the ideal messenger to denounce Trump’s xenophobia as categorically un-American. For established on the same core principles of acceptance and tolerance, Islam and America are both symbols of  love, compassion, inclusion, peace, sacrifice, mercy, openness, equality, freedom, courage, and pride in one’s work.

In that moment of glorious political theater, Mr. Khan did not sound like a man trying to make excuses for the world. He was not looking for scapegoats to blame and punish. On the contrary, he had a story of courage to tell. He was there to guard his son’s legacy and to protect and honor a nation’s future. He was there to invest and believe in a future where America is more loving than it was yesterday. When Mr. Khan was talking about his son’s heroism he was talking about the America that his religious ancestors helped create with their blood, sweat and tears. He was talking about a country that he has been willing to fight for every day of his life. What has Mr. Trump been willing to fight for beyond the personal satisfaction of winning?

Like many immigrants, we came to this country empty-handed. We believed in American democracy; that with hard work and goodness of this country, we could share in and contribute to its blessings.

We are blessed to raise our three sons in a nation where they were free to be themselves and follow their dreams.

Our son, Humayun, had dreams too, of being a military lawyer, but he put those dreams aside the day he sacrificed his life to save the lives of his fellow soldiers. Hillary Clinton was right when she called my son ‘the best of America’.

If it was up to Donald Trump, he never would have been in America. Donald Trump consistently smears the character of Muslims. He disrespects other minorities; women; judges; even his own party leadership.

He vows to build walls, and ban us from this country. Donald Trump, you’re asking Americans to trust you with their future.

Let me ask you: have you even read the United States constitution? I will gladly lend you my copy. [he pulls it out] In this document, look for the words ‘liberty’ and ‘equal protection of law’.

Have you ever been to Arlington Cemetery? Go look at the graves of brave patriots who died defending the United States of America.

You will see all faiths, genders and ethnicities. You have sacrificed nothing and no one.

We cannot solve our problems by building walls, sowing division. We are stronger together. And we will keep getting stronger when Hillary Clinton becomes our President.

In conclusion, I ask every patriot American, all Muslim immigrants, and all immigrants to not take this election lightly.

This is a historic election, and I request to honour the sacrifice of my son – and on election day, take the time to get out and vote.

And vote for the healer. Vote for the strongest, most qualified candidate, Hillary Clinton, not the divider. God bless you, thank you.