The Truth of “the worst”: Amending our Orlando Statement 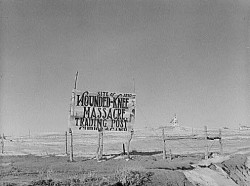 On Monday we issued a statement of mourning and sympathy from our executive director, Rev. Kristin Stoneking, regarding the horrendous violence that occurred over the weekend.

Since then, we’ve heard from a few supporters as well as FOR staff that it was an oversight to call the Orlando tragedy “the worst mass shooting” (or mass killing) in United States history, given the numerous massacres of mostly indigenous peoples that ended with far more deaths.

Perhaps it would’ve been true to write that the killing of 49 people (50 including the gunman) and wounding of more than 50 is the worst massacre by a lone shooter in U.S. history. However, it is also true that the murders at the Pulse do not constitute the worst mass killing and we regret that error.

The truth is that our country has been built on violence.

From the massacre of Native peoples living on this land when new inhabitants arrived to the violence of Africans brought to this country in slavery, violence pervades our history. Some accounts put the number of years that the United States has actually experienced peace since 1776 at a mere 21 years. And that doesn’t account for non-military massacres such as the Bloody Island Massacre where 60-100 perished; the Lawrence Massacre where 185-200 died; or the Greenwood Massacre in Tulsa, Oklahoma, where upwards of 300 people were killed and 800 wounded.

Modern day violence is perpetuated through media narratives that further the harm through sensationalizing. But there is a larger perspective that needs to be lifted up. Indeed, the Pulse massacre is not “the worst in U.S. history” in terms of the numbers slaughtered; it is sadly one more instance of absolute disconnect from the truth of the human heart.

The essential message of the Fellowship of Reconciliation is that all life is sacred.

We believe that true resolution and healing of human conflict comes through the unifying power of love through the way of nonviolence. Clearly, with a vast history of violence in this country and the world and the seeming escalation of violence in recent times, our work together continues to be essential.

Carrying the message of nonviolence is vitally important, and we deeply appreciate your constant support — and for calling us to examine our messaging so that our words represent our truth.