I mourn with you for the victims of the worst mass shooting in the history of the United States, and I send love and sympathy from FOR to the families and friends of those killed and still gravely wounded in Orlando, Florida, on Sunday.

I’m also deeply concerned about the perpetuation of violence as a result of this heinous crime — through ongoing hateful rhetoric stoked by fear. 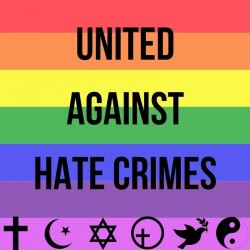 Call on Congress to require background checks on all gun sales, from the Brady Campaign to Prevent Gun Violence.

For those in Florida, consider donating blood, even though it might take a few days. If you are unable to do so due to the FDA’s discriminatory policy, consider encouraging allies to donate in your place.

Follow The Center in Orlando for the latest from the local LGBTQI community.

Reach out to LGBTQI friends, colleageus and family today. For those you know in Florida, Equality Florida has a list of counseling and mental health support.

Support FOR’s ongoing work for LGBTQI equality and to #EndIslamophobia:

As I said in my remarks at a candlelight vigil in Davis, California, Central Park, “any kind of hatred only begets hatred” and, yet, “together we can be stronger than the hate.”

It was such a gift to be invited to speak by the Davis Phoenix Coalition and to be a part of a community gathering to mourn and to heal. I’d like to share some of my words with you now: 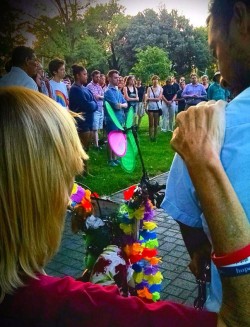 From the words of the Prophet Isaiah in both the Christian and Hebrew scriptures, “Comfort, O comfort my people, says your God. Speak tenderly to Jerusalem, and cry to her that she has served her term…”

When I was in New York City last month as part of my work as Executive Director of the Fellowship of Reconciliation, I happened to have an opportunity to visit the legendary Stonewall Inn, “Where Pride Began,” for the first time. Although it is still a hole in the wall, I was reverent. The Stonewall Inn is the site where the mothers and fathers of my tribe gathered for connection, joy, and solidarity. The freedoms that I now enjoy as an out lesbian woman are because of their courage, and because they had a place to gather that emboldened them in their courage.

The attack on the patrons of the Pulse is abhorrent, tragic, beyond awful. Over 50 people are now dead, making this the worst mass killing in the history of this country. And the location of the massacre makes it clear that this was not just murder, but an attempt to break the soul of a people.

Queer nightclubs and bars have been our place to honor each other, the spark for our activism, and perhaps the place more than any other where members of the LGBTQI community have found acceptance.

To attack us there is to try to eliminate a place of solace and healing, of connection and freedom.

This is a level of hate that is unfathomable, and yet exists. The intention is to terrify annihilate. Please make no mistake — this hatred is coming from extremism and a worldview of that believes in violence.

Though the murderer claimed allegiance to ISIS, this act has nothing to do with true Islam.

And that is why we are here, dear sisters, brothers and siblings of a more nuanced gender. We know that together we can be stronger than the hate that engendered this malicious and horrifying murder. We must use all the powers available to us — our mental, moral, emotional, physical, and spiritual powers — to get rid of the hate. And to get rid of the guns.

Together we can be stronger than this single act of destruction.

We can take on our culture of violence where shooter games and blood and murder are common place on the many screens that proliferate in our lives and make us think that violence is normal.

It’s not normal. It is a manifestation of deep deep brokenness. You know this. We have the power to reclaim our lives and our world.

We will light our candles as a symbol of that commitment, as a symbol of those who are no longer with us in physical body but who nevertheless will live on with us through the light of their spirits.