Friend of FOR Rich Lapchick penned this moving tribute to Muhammad Ali for ESPNon Monday. 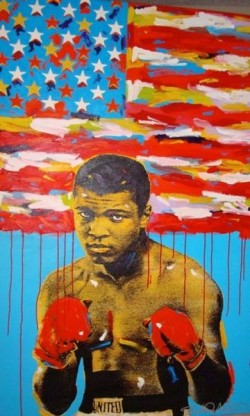 I wrote columns for ESPN on Muhammad Ali’s 65thand 70th birthdays. I was looking forward to writing again in January 2017 for his 75th birthday. That was obviously not meant to be as the world mourns the loss of this giant.

Some two decades after Ali spoke to the U.N., “the man from Ghana,” whose name was Kofi Annan, became the first U.N. staff member to be named secretary-general of the United Nations. He asked me to help get Ali to be his first Messenger of Peace. Ali was a perfect choice.

After the ceremony, Annan’s wife asked Ali to come to the U.N. Plaza, where several hundred children had marched from Harlem to the U.N. to commemorate International Children’s Day. Ali, who adores children, did not hesitate. He confounded U.N. security as he marched into the crowd. There was no way that any of these children could have known who Muhammad Ali was as a boxer or as a world figure.

I watched as child after child ran to him, jumped into his arms and climbed on his back. U.N. security could not do anything to stop Ali from spreading his joy and love. They simply began to watch the wonder before them.

The Ali family has requested donations to the Ali Center in lieu of flowers. Let’s do that.

But the best thank-you gift we can give to his legacy would be to stop the hatred of Muslims and realize this peacemaker better represents the millions of Muslims around the world than the small band of terrorists who use the name of Allah to spread hate and destruction. Muhammad Ali put it perfectly in one of his last public statements: “I am a Muslim and there is nothing Islamic about killing innocent people in Paris, San Bernardino, or anywhere else in the world. True Muslims know that the ruthless violence of so-called Islamic jihadists goes against the very tenets of our religion.”

Read the full essay by Rich Lapchick on ESPN.