With Trump endorsement, Paul Ryan risks gaining the world, but losing his soul 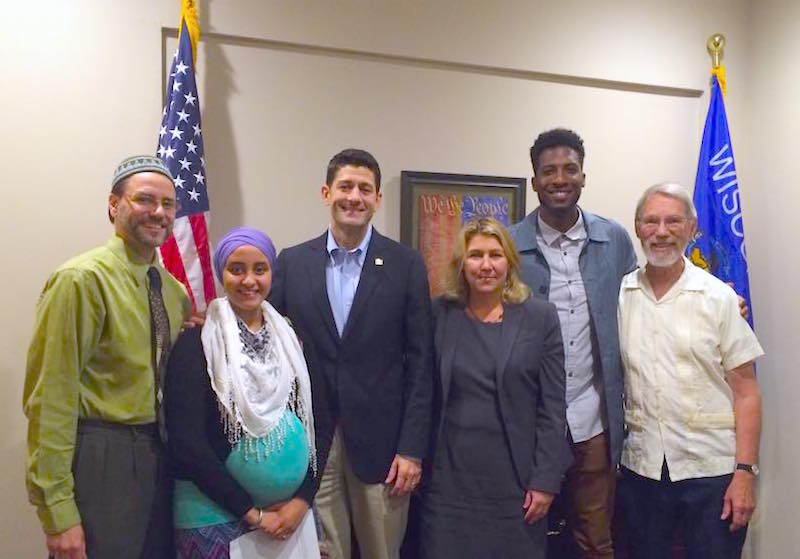 “Are you aware that Ryan endorsed Trump today?” asked the local television reporter after our #GiveRefugeesRest delegation met with House Speaker Paul Ryan at his district office in Janesville, Wisconsin on Thursday. As it happened, we weren’t aware — the endorsement literally came while we were meeting with him, with an unobtrusive tweeted link to a column in the local paper. There was no question to me that the timing was intentional. No one with the political acumen of Ryan would drop an announcement with that level of impact without planning it down to the very detail and minute.

In spite of refusing to endorse Trump just three weeks ago, Ryan has indeed now endorsed Donald Trump, saying he would vote for him in November. And this with no apparent concessions from the presumptive Republican presidential nominee. Ryan denounced Trump’s plan last year to ban Muslim immigrants from the United States, and has regularly drawn distinctions between his views and those of Trump. So what has changed in three weeks?

Our campaign to #GiveRefugeesRest had brought our small group together in Janesville — two members of the local Muslim community, Salih Erschen and Sabrina Erschen; Neil Deupree, a member of our Rock Valley Fellowship of Reconciliation chapter, myself and Anthony Grimes, our head of campaigns — to meet with the nation’s highest-ranking elected Republican on his home turf. Our discussion was frank, honest and open. Ryan was notably frustrated with the rise in Islamophobic attacks and hate crimes, expressed concern about the environment of fear and danger in which Muslim Americans currently live, and was visibly agitated when the subject of Trump came up. He agreed that anti-Muslim rhetoric is fueling this rise in violence and affirmed that it must stop. All of this is strikingly inconsistent with his simultaneous endorsement that he knew was hitting the media while we spoke.

We grounded our common concerns and common values in the fact that we are all people of faith. Ryan has been unusually candid about his faith as a Catholic and claims to ground his leadership in Christian principles. He is known as a dedicated church attender.

What Ryan has failed to realize is that a Republican Party that advocates hate, that would villianize the most vulnerable among us — and that is veering dangerously toward being the party of white supremacists — is not worth saving. Ryan would do well to heed the words from the Gospels of Mark and Matthew in the Christian Scriptures,

“What will it profit a man if he gains the whole world but loses his soul?”

Many have called the release of the endorsement while meeting with FOR, the nation’s oldest interfaith peace and justice organization, duplicitous on Ryan’s part. Was his intention to use the moral authority of FOR to cover for an unprincipled act? What I experienced was a man caught in a system of binaries, where complexity is eschewed, and nuance is given no space. Ryan would like to suggest that he and Trump have little in common beyond the label “Republican”, but in our current political culture, partisanship is reified such that there are no alternatives or possibilities for a third way.

Although I imagine Ryan had to hold his nose while agreeing to endorse Trump, his caving to politics and power have aligned him with the same vitriol and bullying that he denounced in our meeting.

Ryan has been referred to as the great unifier, and he appears willing to play the part. His reverence for and loyalty to the Republican Party is clear when he speaks about the party “of Lincoln, of Reagan, of Jack Kemp.” But he is like a boy facing the breakup of his cherished, but deeply flawed, family due to the chaos inflicted by a violent sibling. Keeping the family together at all costs has become an end in itself.

Our group has been clear from the outset that our outreach to Ryan went beyond partisan politics — the very purpose of trying to encourage a discussion and examination of the current wave of Islamophobic hate, bullying and divisiveness was to model a new, nonviolent way forward. If FOR is aligned with any political manifestation it is the left, and this is well known. What we offered was a way out of the stagnation of the current political discourse: an unlikely partnership with fellow Americans, people of faith, who have common concerns about the divisiveness and hate-filled rhetoric in our country. We affirm common values toward compassion, freedom and a violence-free existence. The olive branch is still there, but it seems Ryan has so shortened his reach with this endorsement that he will not able to grab hold.

We call on Ryan to denounce anti-Muslim rhetoric and honor Muslim Americans during his keynote address at the GOP convention in July. At the very least, he must follow up this endorsement with clear and public expectations for a return to civil discourse this presidential election, a compassionate response to our global refugee crisis, and active pursuit of true freedom of religion.