Compassion Not Criminalization: A Faith Response to Addiction & Drug Policy 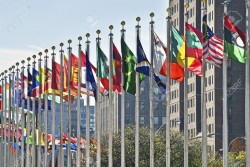 In 2009, the United Nations put forth a multilateral response to the global drug problem. The scourge of the drug trade contributes to untold human rights violations, massive corruption, and violence that perpetuate brokenness and suffering on a worldwide scale. The U.N. plan suggested that the solution must include “(a) more development assistance to reduce supply and (b) more attention on health to lower demand.”[1] It had broad support by Member States and engendered great hope for progress in this area.

Now, seven years later, there is growing awareness that the implementation of the strategies related to the original plan, which, particularly in the United States, have included criminalization of addicts and those trapped in cycles of violence as a result of the drug trade, have not achieved the envisioned goal. A special session of the U.N. General Assembly has been called to assess interim progress on the 2009 plan; we have the opportunity to reflect on why the plan has not hit its mark, and make a course correction. As part of a global multifaith coalition of organizations, faith communities, and religious leaders, we believe that, in part, the strategies of the 2009 plan have not been wholly successful because they have not taken into consideration the spiritual dimensions of the global drug problem.

Though the document welcomed and affirmed the role of civil society and named specifically the importance of non-governmental organizations in combating this global issue, the role of the faith community was not named specifically. Without the participation and leadership of the faith community, a critical piece of the answer to why addiction happens will be missing, ultimately prohibiting the eradication of the insatiable demand that fuels the global drug trade. As long as there is an unmet demand, the problems associated with drugs — violence, corruption, broken relationships, and human rights violations — will persist.

All humans search for experiences of ultimate transcendence. Ultimate transcendence may be described variously in the context of different spiritual traditions and practices, be it the peace of meditation or the exaltation of a tradition’s high holy days. It can include a sense of joy, expansiveness, liberation, energy, calm, insight, hope, love, and an experience of the ineffable.

The use of drugs, substances, and other experiences (eg, sex, gambling) mimic the experience of ultimate transcendence by creating a temporary high. But these experiences of transcendence are always short-lived and limited, leaving the user in an even lower mental or emotional state. Yet the need for transcendence remains, and so a subsequent experience is sought, and often with a larger amount of the substance in an attempt to prolong the false transcendence. At the same time, continued use of the substance decreases the high, leading to greater or more frequent use. Thus begins the cycle toward addiction and the consequent demand that fuels the global drug trade.

Understood this way, it becomes clear that criminalization in a retributive justice paradigm will never lead to an eradication of the global drug problem. Retributive justice presumes that the offender can transform through deprivation, but the original hunger for transcendence will always be there. And, when seen in the context of a human response to the need for ultimate transcendence, it is also clear that addiction calls for a response of compassion rather than criminalization.

The hope of the 2009 “Political Declaration and Plan of Action on International Cooperation Toward an Integrated and Balanced Strategy to Counter the World Drug Problem” was laudable, but in its application, supply and use of some substances has decreased, while supply and use of other substances has increased. The document encourages focus on the middle ground between criminalization and legalization, “framing our collective efforts against drugs less like a war and more like an effort to cure a social disease.”[2] If it is a disease, it is more properly understood as dis-ease; it cannot be cured unless its root cause, i.e., the need for transcendence, is addressed.

In the meantime, the consequences of this dis-ease and correlating criminalizing drug policies are seen in communities, families, and overflowing prisons. From a U.S. interfaith perspective, we identify the need to collaboratively reform and transform the nation’s criminal justice system and address drug policies that intersect with policies related to HIV prevention; drug production and trade agreements; human rights and public health practices; law enforcement and sentencing policies; and compassionate models of care for the families and communities impacted by drug addiction. We advocate the elevating of policies of compassion, care, and harm reduction. 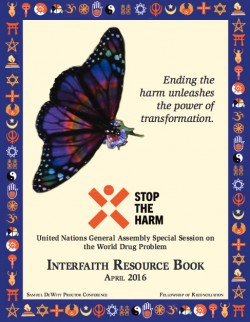 A compassionate approach would involve the resources of the world’s spiritual and religious traditions. In preparation for the 2016 U.N. General Assembly Special Session on the World Drug Problem, the Fellowship of Reconciliation and the Samuel DeWitt Proctor Conference, along with a broad coalition of religious groups and communities, have collected reflections, liturgies, prayers, meditations, and policy papers from a diverse array of multifaith and spiritual leaders. There is no question that the solution to the global drug problem requires a multi-faceted and comprehensive approach. In that light, we offer these resources as an essential key in the discourse toward a global solution of the worldwide drug problem.

Rev. Kristin Stoneking is executive director of the Fellowship of Reconciliation, and an ordained United Methodist minister based in Davis, California.

[1] Political Declaration and Plan of Action on International Cooperation Toward an Integrated and Balanced Strategy to Counter the World Drug Problem, United Nations, Vienna, 2009, p. 2.