An open letter to the UN to end the Korean War 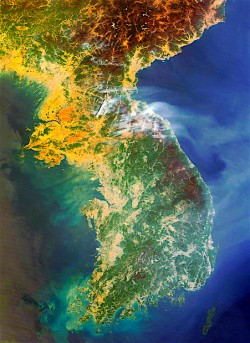 Lead by International FOR’s main representative to the United Nations in New York, John Kim, IFOR along with the Center for Global Nonkilling sent the statement below to members of the UN Security Council as they prepare deliberations in response to recent actions of North Korea.

As you know, the U.S. is pushing the Security Council to impose additional sanctions on the DPRK (North Korea), in connection with the latter’s Jan. 6th (Korean time) underground nuclear test. Soon after we sent the letter, DPRK made a surprise announcement that it launched an earth observation satellite on Feb. 7 (Korean time). It seems North Korea is determined to exercise their own rights to self-defense.

While the U.S. officials have condemned these moves of DPRK vehemently, not many American people are aware of the the military threats and provocative actions the U.S. has been taking against DPRK in recent months. It is critical that the peace and just community in the U.S. understand the full picture of the developing situation in Korea.

Imposing additional sanctions on North Korea or China are not the answer.

Ending the lingering Korean War with a peace treaty is the just solution to the Korean conflict. We need to stop the continuation of the failed U.S policy on DPRK. The U.S. is currently building up its military power in Northeast Asia, including an extensive, expensive anti-missile system in the area, which will undermine security system of DPRK, China and Russia.

Under the current circumstances of rising danger and arms race, It is important for the American people and the civil society to call for a genuine engagement policy toward DPRK, instead of demonizing it constantly.

View this statement on the International FOR site or download a PDF print version.

Dear Ambassadors to the Security Council,

As concerned NGOs accredited to the UN, we are writing to urge the Security Council to take positive measures to defuse the rising military tensions on the Korean Peninsula. In this regard, we would like to encourage the Security Council members to tackle the root causes of the continuing military tensions on the Korean Peninsula and act in such a manner “to prevent an aggravation of the situation” in Korea (Article 40, UN Charter), in “conformity with the principles of justice and international law” (Article 1 (1), UN Charter).

While we are deeply concerned about the underground nuclear test in the Democratic People’s Republic of Korea (DPRK) early this year, we are equally concerned with the several provocative actions taken against the DPRK in recent months, including the two unilateral sanctions and the dispatch of a nuclear-capable B-52 bomber by the United States, that contravene the UN Charter, customary international law and the Korean War Armistice Agreement. These belligernt moves also deserve the attention of the Security Council. It is important to recognize that the Korean War was merely halted with a military ceasefire agreement in 1953, and that the DPRK is still in a state of war with the U.S. and Republic of Korea (South Korea).

It must be noted that some 30,000 U.S. troops are still stationed in South Korea—using the UN flag. Pursuing a policy of sanctions, military pressure, and regime change against the DPRK increasingly pushes its government to continuing with the development of its “nuclear deterrent”. In our opinion, imposing additional UN sanctions on the DPRK alone, under the current circumstances, will be not only counterproductive, but may also be seen in the world as another act of double standard by the Council, in view of the continuing testing and modernization of thousands of nuclear weapons by other nuclear powers.

What is urgently needed to stop the recurrent cycle of threats in Korea is the transformation of the precarious and outdated armistice regime into a permanent peace regime, as called for a long time ago in the Armistice Agreement of 1953 (Paragraph 60, “the peaceful settlement of the Korean question” through a political conference). It is also helpful to take note of the 1975 UN General Assembly resolution, which called upon the “real parties to the Armistice Agreement to replace the Korean Military Armistice Agreement with a peace agreement” (A/RES/3390B). After more than 60 years of the unstable armistice regime, isn’t it about time for the main parties of the Korean War to sit down together to negotiate such an agreement?

An official end to the lingering Korean War is essential for further development of peace, security and human rights in Korea and the Northeast Asia. We believe the Security Council has a major responsibility in promoting permanent peace in Korea. Thus, we would like to ask the Security Council to pass a resolution under Chapter VI, requesting the Secretary-General to organize a UN Peace Conference on Korea in Geneva, within three months of adopting the resolution, and to appoint a special UN envoy to chair the conference. We strongly urge the main parties to the Korean War — DPRK, ROK, the U.S., and China — to attend the conference to negotiate a peace treaty to end the Korean War officially. Even if any of the permanent members of the Council that is also a belligerent party objects to such a conference, it should not be able to veto such a resolution since it would be required to abstain from voting on it as a party to the “dispute” under Article 27 (2), UN Charter.

In addition, in the same resolution, the Security Council may also recommend to the U.S. to accept the proposal made by the DPRK in January 2015 that it would suspend its nuclear tests if the U.S. would suspend its large-scale joint war drills, with its military allies, threatening the DPRK. Such a mutual suspension, duly accompanied by confidence measures, would serve as a constructive, preliminary step towards reducing tensions in the region and help the convening of the UN Peace Conference on Korea.

The proposed initiative by the Council would greatly contribute to a peaceful settlement of the costly Korean War as well as a gradual denuclearization of Korea, while invigorating the important role of the Council in the “pacific settlement of disputes,” as the leading body of the UN in achieving its main purpose as a peacemaker. We urge you to seize this opportunity and adopt such a resolution as soon as possible, for the sake of promoting permanent peace, development, and human security in the Korean Peninsula, Northeast Asia and the world.